AN ODE TO A MARGINAL FIGHTER PLANE - THE MS.406 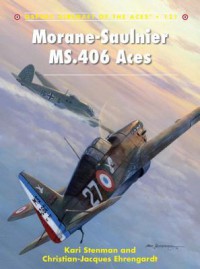 This book provides a concise history of one of the first monoplane fighters in France's Armée de l'Air (air force) to be deployed in combat during the Second World War.

Despite being underpowered, lacking self-sealing tanks and armor plating, and being lightly armed, the MS.406 managed to give a good account of itself in taking on the Luftwaffe in 1939-40. And after the French defeat in June 1940, the MS.406 soldiered on with the Vichy French Air Force (in Syria, Lebanon, Madagascar, and Indochina) through December 1942. Finland's air force also made extensive use of the MS.406 in combat actions against the Soviet Air Force, which this book explores at length.

On the whole, "Morane-Saulnier MS.406 Aces" is better suited to the ardent student of Second World War aviation than the dilettante enthusiast.