THOSE MAGNIFICENT MEN IN THEIR FLYING MACHINES 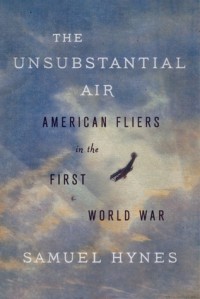 The author (as a veteran Second World War combat pilot) brings a special sensitivity and awareness to the subject matter of this book --- the young American men who flew in combat in Europe during the First World War --- that stands it in good stead. Airplanes are so commonplace to us today that we tend to take them for granted. But in 1917 and 1918, they were new technology, seen first-hand by very few people, fragile yet robust as their potential continued to grow. And under the impetus of the war, as airplanes continued to develop as lethal, efficient, killing machines, a mystique developed around the scout, 'chasse', or pursuit (fighter) pilot, who was equated with the knights of yore.

"The Unsubstantial Air" offers the reader through diary and letter excerpts from the airmen themselves rarefied views into what flying and the war was for them. I thoroughly enjoyed the experience and highly recommend this book for anyone who has a curiosity about what flying was like when aviation was in its infancy.