'TO ACT - TO BE' or ALL THAT GLITTERS AIN'T GOLD 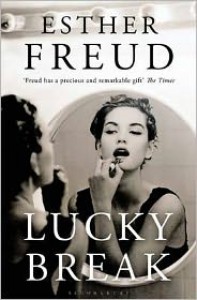 As someone who is both an avid movie fan and a respecter of those people among us who have opted to pursue acting careers, this is a novel I thoroughly enjoyed reading. "Lucky Break" is largely centered around 3 people --- Nell Gilby, Charlotte ("Charlie") Adedayo-Martin, and Dan Linden --- who first met in London during the early 1990s as drama students at Drama Arts, a school headed by Patrick Bowery, who is an exacting taskmaster and holds in his hands the future of his charges. Drama Arts proves to be a school of hard knocks where illusions are cruelly shattered as each student endeavors in Patrick's words, "to Act. To Be."

For those students who survive the first 2 years at Drama Arts, there is the offer of an additional year, graduation, and prospects for both stage and screen. BUT for those asked to leave after the 2 years, it could either be the end of life as he/she had known it, leaving them utterly adrift for having failed to measure up as would be actors -- OR finding one's way into another line of work. That is, settling for an ordinary existence.

Each chapter of "Lucky Break" gives the reader entree into the lives, loves, and struggles of the 3 main characters as each goes on from Drama Arts [hint: one of the 3 fails to graduate] to finding an agent to help get one's acting career off the ground, taking the plunge into the fickle and ruthless world of stage and screen, and establishing success and longevity in what can be an unforgiving career. It was fascinating to see how, over a 14-year period, the destinies of Nell, Charlie, and Dan were played out. For any reader like me with a curiosity about the lives of people in the acting profession, this novel is a winner.