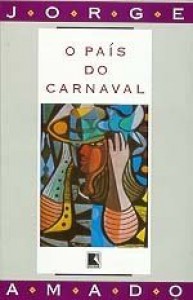 'O País do Carnaval' is the debut novel of one of Brazil's most celebrated writers of the 20th century, Jorge Amado. Largely autobiographical, it is based upon the life of an idealistic young man (Paulo Rigger) from an affluent background in Brazil's poverty-ridden Northeast with communistic sympathies.

The year is 1930 and Paulo is a law student in Rio de Janeiro, where he is leading a life that is at variance with his beliefs. Amado shares with the reader the rich and colorful life a person of means could enjoy in Rio at the time. In essence, 'O País do Carnaval' can be read as a polemic on social inequality in a Brazil that was (at the dawn of the 1930s) on the cusp of a wrenching transition from an agrarian to an industrialized nation.

I bought this novel during my second trip to Brazil in June 1990 and found it fairly easy to read - despite my threadbare, less than fluid Portuguese. For anyone who has read other novels from Jorge Amado and has a fascination with Brazil --- as I do --- I highly recommend 'O País do Carnaval.'