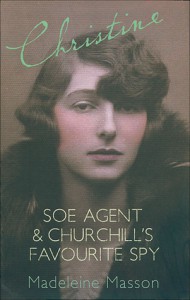 Of the many books I've read about the activities of secret agents whose bravery seems to be beyond belief, this particular book I found deeply affecting. For it is centered upon a most remarkable woman, Christine Granville (born Krystyna Scarbek in Warsaw in 1915 of an aristocratic family who later fell upon hard times).

Following Poland's capitulation to Germany in September 1939, Christine made her way from East Africa (where she had been with her husband Jerzy Giżycki at the time war was declared) to London to offer her services in fighting the Germans. Both Christine and her husband had useful contacts there, which led to Christine travelling to Hungary before the end of the year. There she became involved in intelligence work, which entailed clandestine forays into German-occupied Poland to gather intelligence and assist escaped prisoners of war and other fellow Poles on the run from the Nazis in getting out of Poland and back into the fight. In the process of doing this dangerous work, Christine became reacquainted with Andrew Kowerski and the two fell deeply, irretrievably in love.

Eventually, as the fortunes of war tilted increasingly in Germany's favor during 1940 and 1941, it became untenable for Christine and Andrew to remain in Hungary. With considerable effort, they were able to get to Turkey and eventually to Cairo. Unfortunately, they fell under suspicion of being German spies from some of their compatriots who did not approve of their close relations with the British. (The Poles, in contrast to other nations under Nazi subjugation, were given complete independence by the British in the running of their espionage/intelligence operations in Poland.) Thankfully, they were exonerated and Christine went on to perform invaluable work with the Resistance in the Vercours region of France during the summer of 1944 as an agent in Britain's Special Operations Executive (SOE).

Upon war's end, despite the honors heaped upon Christine, she was promptly demobilized, given a small gratuity, and soon forgotten by the country (Great Britain) for whom she had served so bravely and fearlessly. Sadly, the postwar years were difficult ones for Christine Granville, who was unable to fully integrate herself into a peacetime world. Any person who reads this book will be in awe of what was a most extraordinary woman.