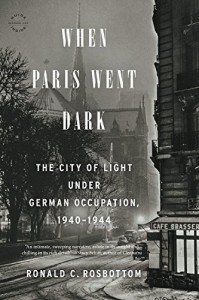 Last month, I attended a book reading at a local bookstore that was given by the author, who later graciously autographed my copy of this book. For personal reasons, Paris is a city that thrills and excites my imagination and interest. (I grew up on stories of "la Ville-Lumière" from my father, who had spent considerable time in Paris, where he had received his discharge from the U.S. Army in July 1946.) I feel lucky to have twice visited there and walked along many of its grand boulevards and streets. It is a place where the past is not dead, but rather coexists with the present.

In reading this book, I came to know of a Paris during the darkest period of its history, when it was under German control between June 14, 1940 and August 25, 1944. I like to cite some passages that helped to make it so startlingly clear in my mind how a city so renowned for its culture, architecture, and free spirit was declared an open city by the French government, and gradually absorbed by its German conquerors:

1) “… almost four million inhabitants fled Paris and its environs in late May and early June [1940] rather than await the increasingly inevitable occupation of their precious capital. Several memoirists mention that Parisian boulevards soon resembled empty movie sets... Groceries and bakeries were closed, their entrances barricaded; automobiles had vanished;"

2) In mid-June of 1940, the German army arrived before Paris, exuberant but stunned. They could see in the distance the Eiffel Tower, standing as confidently over the world's most recognized cityscape as when it had first appeared there just fifty-one years earlier. The Wehrmacht had been almost as surprised as the French at the ease of their foray into the Low Countries and France."

3) "About 6:00 [AM} on Friday, June 28, 1940, a convoy of convertible Mercedes limousines ... entered nearly abandoned Paris, zigzagging around military barriers and passing a few staring Parisian police officers and bystanders. They had come from the northeast, speeding down Avenue de Flandre, then Rue La Fayette, to ... the Opéra de Paris. Adolf Hitler was tense with excitement." (The author provides a diagram, showing the route that Hitler and his entourage followed that day. In all, Hitler spent 4 hours in Paris, marvelling over its architecture and showing no interest in its neighborhoods or restaurants, markets, and cafés. It would prove to be his one and only trip to the city.)

4) "The German occupiers wanted to unmake dynamic Paris, to create a static simulacrum, preserving its most banal characteristics for their own enjoyment. They thought they could persuade the world that they, too, were culturally and aesthetically sensitive, while keeping Parisians literally in line. For a time, the strategy seemed to work."

5) "The Parisian apartment figures prominently in recollections of the Occupation. An apartment was more than a place of expected physical comfort; it was also a site of psychological retreat from confusion and uncertainty. Yet... the apartment could be a trap, and many wrote of feeling closed in there by events and police, always worrying about how they would escape should there be an ominous knock at the door."


"WHEN PARIS WENT DARK" is highly readable and full of personal accounts -- from both sides of the Occupation, French and German, Jew and Gentile -- which help to give the reader a tangible sense of immediacy to an era now fast fading into history as the Second World War generation becomes fewer in number. It also offers an examination into France's continuing efforts to come to grips with this dark chapter in its history with which it remains in many respects unreconciled. I'm so glad I read this book because I now want to learn so much more about this epoch.