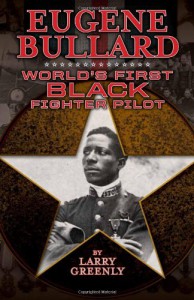 This is a concise story about a most remarkable African American --- Eugene Bullard (1895-1961). who --- despite all the obstacles set against him at a time when overt discrimination against African Americans and other people of color was legally sanctioned and condoned in most social quarters in the U.S. --- managed to travel to Europe in 1911 in search of a better life. Three years later, with the outbreak of World War I, Bullard offered his services to the French Foreign Legion, where he fought for 2 years, distinguishing himself in battle and being seriously wounded. After he recovered, Bullard was able to transfer to the French Aéronautique Militaire, where he trained as a fighter pilot, winning his wings on May 5, 1917.

Bullard's time at the Front as a combat pilot would last but a few months. Despite his commendations for valor by the French government and his proven ability as a pilot, Bullard was rejected for service in the U.S. Army Air Service when he had applied for a transfer there. (The U.S. military had no interest in having African American combat pilots.)

The book goes on to outline Bullard's postwar life in Paris (where he ran a number of businesses and jazz clubs), the intelligence work he performed for his adopted country shortly before the Second World War, and his later life back in America, where he was largely forgotten until shortly before his death when he was interviewed on a nationally popular TV show.

The greatest value of "Eugene Bullard" is its inspirational value. For here was a man who defied the odds many times, and won.