THE TIMES WERE A CHANGIN' 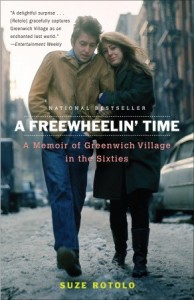 Suze Rotolo has written a book based in part on her past relationship with Bob Dylan, as well as one that recaptures the essence of a decade (the 1960s) that set in train both progressive-revolutionary and reactionary forces that transformed the world in ways that affect it to this day. Though I was born in the 1960s (in fact, the same year that the Beatles came to the U.S.), my memories of it are largely personal and seen as vignettes and random images as one would find in a photo album. So, I am thankful for memoirs such as this which help to give me a more solid sense of what that time was really like. For Rotolo, "the sixties were an era that spoke a language of inquiry and curiosity and rebelliousness against the stifling and repressive political and social culture of the decade that preceded it. The new generation causing all the fuss was not driven by the market: we had something to say, not something to sell."

Rotolo shares with the reader much of her early life in Queens as the youngest child of 2 leftist parents, her subsequent escape while in her teens (following the premature death of her father, an artist by training) to Greenwich Village, where she took in the burgeoning folk music scene and first met Bob Dylan early in 1961. It is a rich, fascinating, and well-told memoir. This is a book to be savored and read again when one seeks reaffirmation in the possibility of helping build a more open, just, and better society through artistic expression.