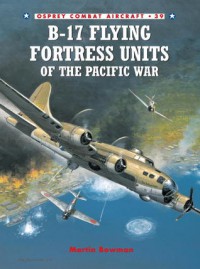 This book provides a clear and concise account of the combat history of the B-17 Flying Fortress 4-engined bombers whose involvement in the Pacific War began on the day of the Japanese attack on Pearl Harbor (December 7th, 1941) to the latter part of 1943, when they were replaced by the B-24 Liberator bomber, which had a longer range and a bigger bomb load at medium altitudes.

The general reader and aviation enthusiast will also find here an extensive photo collection, illustrations, and some personal stories from the veterans of several of the U.S. Army Air Force (USAAF) bomber groups who flew B-17s from the Battle for the Philippines, the Japanese invasions of the Dutch East Indies & Solomon Islands, the Battles of the Coral Sea & Midway, and the Battles for Guadalcanal and the Eastern Solomons (which resulted in American victories and the beginning of the turning of the tide of the Pacific War in favor of the Allies).   HIGHLY RECOMMENDED.