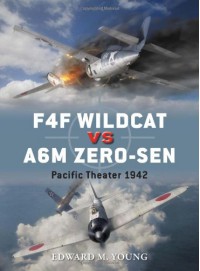 This is a very readable and informative book about 2 remarkable aircraft types (the F4F Wildcat, which was widely used by U.S. Navy & U.S. Marine Corps fighter units in the Pacific in 1942 - and the A6M Zero-sen, a remarkably manoeuvable, long-range, nimble fighter that was the mainstay of fighter units in the Imperial Japanese Navy) that battled against each other in 1942.  It's also richly laden with photographs, offers an illustrated cockpit layout of both planes, and personal accounts from the pilots who flew both the Wildcat and the Zero-sen in combat.   Simply put, this book is a winner for aviation enthusiasts and general readers alike who seek a general knowledge of both aircraft and their combat histories (from the Battles of Coral Sea & Midway to the crucial Battle for Guadalcanal, which blunted Japan's offensive power and allowed the Allies to buy valuable time and bring in new units with which to defeat Japan).