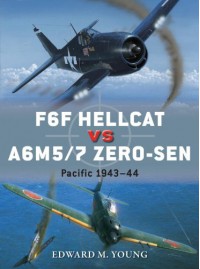 Here's another fine example in the Duel series of books published by Osprey comparing 2 combat aircraft which fought each other in the skies, be it during the First World War, the Second World War, the Korean War, or Vietnam. In this case, Edward Young provides a concise, though comprehensive, history of the clashes that took place vis-a-vis the F6F Hellcat and the A6M Zero-Sen between October 5, 1943 and the end of the war on August 15, 1945.

From the Solomons and New Guinea to the Central Pacific, from the Philippines to the skies over Japan itself, the Hellcat took the measure of the once vaunted A6M Zero-Sen fighter. Indeed Young points out that "... the duel between the Hellcat and the Zero-sen reflected a large battle between rival aeronautical technologies and industrial capacities, a battle America won. It was first to develop powerful aircraft engines of 2,000hp, design new fighters around these engines and get them into quantity production ahead of Japan. The 2,980 Japanese aircraft lost to Hellcats in combat during 1944 was the result. The Japanese aviation industry was never able to catch up, and eventually it ran out of time."

Furthermore, "[w]hile the Hellcat could out-perform the Zero-sen in most areas except maneuverability, having an aircraft of superior performance was not the sole requirement for success. Pilot quality was equally important. In this area the US Navy did a better job than the IJNAF [Imperial Japanese Naval Air Force] of providing its pilots with the training and combat tactics they needed to get the most out of their airplane. The US Navy's development of coordinated defensive and offensive tactics, based on teamwork between sections and divisions, and the rigorous practice in these tactics, proved superior to the individual combat tactics employed by the majority of Zero-sen pilots."

This book also has an impressive array of photographs, illustrations, and pilot accounts from the men who flew both fighters in combat. I give thanks to Osprey for providing the general reader and aviation enthusiast with another fine book.