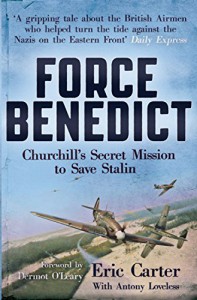 This remarkable book about a little known collaborative endeavor during the Second World War between Great Britain and the Soviet Union --- in which the former nation dispatched a wing of Hurricane fighters to assist the Soviets in defending the key northern port of Murmansk against a possible seizure by the Germans in 1941 --- was the result of a collective effort by surviving veterans of 'Force Benedict' (e.g. Eric Carter) and Antony Loveless to bring this story before a wider audience.

Between August 1941 (when a hastily assembled Royal Air Force [RAF] unit departed Britain for the Soviet Union in the strictest secrecy on the express orders of Winston Churchill himself) and December 1941, 151 Wing took part in combat actions against the Germans in the far north above the Arctic Circle and also trained Soviet fighter pilots to fly Hurricane fighters and support personnel in maintaining a fighter wing in the field. Churchill's reason for sending 151 Wing to the Soviet Union in the first place was to help Stalin stay afloat in his struggle against Hitler. At the time --- summer 1941 --- it seemed very likely that the Soviet Union was on the point of collapse. So much material and soldiers had already been lost, and the Germans had penetrated deep into Soviet territory, put Leningrad under siege and was nearing Moscow. The only port remaining to Stalin that had access to the West was Murmansk. What's more: Murmansk was the only port that maintained a warm water passage year round. Thus keeping the Soviet Union in the war was vital to Britain's long-term prospects for survival (and victory) against Nazi Germany.

The book contains several diary entries from members of 151 Wing which give the reader a palpable sense of immediacy as to what it was really like to live and fight in the Soviet Union during the summer and fall of 1941. There are also several photos of 151 Wing and their Soviet compatriots. All members of 151 Wing, upon return to Britain, were enjoined by the government not to talk about their experiences in the Soviet Union. Otherwise, they would face a court-martial. Indeed, the story of 'Force Benedict' (the code name for the operation) was suppressed by both Britain and the Soviet Union/Russia until 1994. So, for any reader who enjoys reading a story of succeeding against heavy odds, "Force Benedict" is a winner.