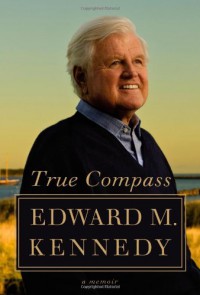 Out of all the memoirs from public figures I have read, this is the best. Senator Edward M. Kennedy --- who earned the title "Lion of the Senate" for his unrivaled skills as a legislator --- takes the reader through the various phases of his life in a way that brings the reader closer to who he was, through triumph and the many tragedies he and his family faced. He was the youngest child of that generation of Kennedys who took to heart the value of public service as a way of promoting positive, meaningful changes in the U.S. to benefit the broad spectrum of the nation's citizenry, many of whom had been long neglected and marginalized --- and in the process, inspired millions to strive to create a more just and better world.

In reading "True Compass," I distinctly felt as if Senator Kennedy himself were sharing with me his life and the values that shaped and sustained him. My one deep regret is that I once had the opportunity --- in 2006, the year before he was diagnosed with the cancer that would kill him 3 years later --- to meet him at a book signing during lunch hour from my job. But I foolishly passed that up, thinking there would be another time to meet him in public. Notwithstanding that, "True Compass" helped to bring back Senator Kennedy as he was in life for many of us who followed his career and admired and revered the man for his long service to the country, fighting for us, the people.