TAKE A JOURNEY TO 1914 BUDAPEST, COURTESY OF "Café Europa" 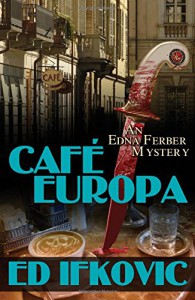 I came to this novel not knowing what to expect. But I was intrigued to learn that its main setting would be Budapest during the late spring/early summer of 1914. I was also curious to learn that Edna Ferber, who had been a famous journalist and writer, would figure prominently in the novel. So, I set myself to embarking upon an exotic journey in a world long gone, in which international travel was largely the preserve of the wealthy and well-to-do.

Edna arrives in Budapest with her friend Winifred Moss, a British suffragette, from Berlin, where she managed to escape from the smothering clutches of her mother. A mother who frets for her daughter's future, which she maintains should be with a husband and children. But Edna, who had over the previous decade, made a name for herself as a journalist and successful short story writer, knows her own mind and is unafraid to assert herself. Both her and Winifred become enthralled with the charm, wonder, and mystery of Budapest --- as well as fascinated by the old Emperor, Franz Josef, and the pomp and circumstance of the Austro-Hungarian Empire, a nation living on borrowed time.

"Sitting daily in the Cafe Europa, [Edna] listens to unfettered Hearst reporter Harold Gibbon as he predicts the coming war and the end of feudalistic life in Europe while patrons chatter." Then there is a murder of a young, wealthy American woman (Cassandra Blaine), who had often frequented the Cafe Europa, and was expected --- through parental coercion --- to marry a cash poor old count. A count who was more interested in the enhancement of his financial status the marriage would bring him than in his future bride. As for poor Cassandra, her heart was with Endre Molnar, a handsome and dashing Hungarian who had been her lover and was now a prime suspect in her murder. Edna, however, who had gotten to know Cassandra briefly in the few days before her death, thinks otherwise, and "begins investigating with the help of Winifred and two avant-garde Hungarian artists."

Ifkovic writes with considerable skill, displaying a deep knowledge and feel for the sensibilities of his characters and the atmosphere of Budapest and Hapsburg society. I admit to being utterly enthralled by the cast of characters in "Café Europa" and the way the drama played itself out. No spoilers here. This is a mystery novel that will keep the reader on his/her toes and --- perhaps like me --- completely fooled as to the identity of Cassandra's murderer. (By the way, Edna Ferber was a real person. Her father was Hungarian and had emigrated to the U.S., where Edna was born in 1885. Three of her novels --- "Cimarron", "Showboat", and "Giant" --- were later adapted for the Broadway stage and the silver screen.)