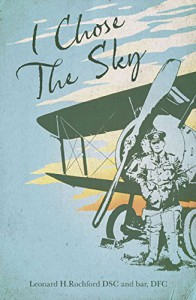 In my early teens, I first learned about the author Leonard Rochford from a book containing the stories of fighter aces from the First World War to Vietnam. So, when I learned earlier this year that his memoir "I CHOSE THE SKY" was being republished, I resolved to buy it as soon as it became available.

Rochford tells a straightforward, honest, and colorful story about his time as a fighter pilot on the Western Front with 3 Naval Squadron (later No. 203 Squadron RAF) during 1917 and 1918. He had been a few months short of 18 when the war broke out. Deemed too young for service, Rochford went on to attend engineering college in London, where he completed the first year course in June 1915. At this point in the memoir, Rochford adds: "The war had been in progress for nearly one year. I was now eighteen years old and I felt I ought to volunteer for service in the fighting forces. It seemed to me there were three choices, land, sea or sky, and as I was still keen on flying, I chose the sky. Having decided to apply for training as pilot in the Royal Naval Air Service, I went along to the Admiralty where I was told that they had received more applications than could be dealt with at present, many of them from young Canadians. I was asked to withhold my application until after my nineteenth birthday."

For Rochford, that was 5 months away. So, he went to one of the private flying schools in London and earned his private pilot's license or Royal Air Club Aviator's Certificate. His descriptions of the aircraft of the period, when aviation was regarded more as a foolhardy sport or hazardous undertaking, make vivid both the excitement and the perils of early flight. (After all, the Wright Brothers had successfully taken to the air only 12 years earlier.)

By the end of 1916, Rochford, having completed his flight training with the Royal Naval Air Service (RNAS) and earned his officer's commission, was assigned to 3 Naval Squadron, a newly formed fighter unit slated for service in France. The squadron arrived in France at a time (February 1917) when they would be up against an enemy with superior fighter aircraft (in the form of the sleek Albatros DIII scout which boasted 2 rapid firing Spandau machine guns to the one Vickers gun on the Sopwith Pup, synchronized to fire through the propeller arc) and better trained pilots. For example, Jasta 11, which was the squadron on the opposite side of the lines commanded by the Red Baron himself, Manfred Freiherr von Richthofen.

The memoir chronicles Rochford's combat service in considerable detail, giving the reader a tangible feel of the frenetic, peripatetic life of the frontline pilot. There are also several photographs (situated in 2 "pockets" of the book), which show much of Rochford's time at the Front (he flew both the Sopwith Pup and the redoubtable Sopwith Camel in combat), as well as several aircraft and airfields of the era.

Rochford, shortly before leaving France for Britain at war's end, summed up his service with the following remarks in his logbook:

"Left No 203 Squadron on the 9th December 1918 after being with them since 24th January 1917. I shall always remember those two years as among the happiest of my life. At all times we were all a happy family and stuck together through thick and thin."

"I CHOSE THE SKY" is an easily readable and engaging book that anyone who loves a good story will enjoy.