THERE IS A "MANGO STREET" IN EACH OF US 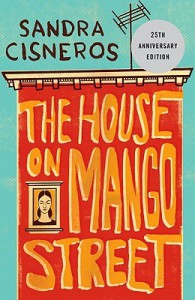 Sandra Cisneros is a writer I had known about for years. But it wasn't until 3 days ago that I began reading this, her debut novel. "THE HOUSE ON MANGO STREET." It's a short novel filled with chapters that tell their own story of a young Chicana girl (Esperanza Cordero) who lives in a modest neighborhood in Chicago peopled with a variety of characters. Some of them come and go in the twinkling of an eye. Others, like Cathy, Queen of Cats, Sally - the apple of many a man's eyes, and Alicia from Guadalajara, reside on Mango Street awhile before settling elsewhere.

Esperanza, as she gets older, has ambitions to leave Mango Street to which she never felt she belonged. She wants her own place. "Not a flat. Not an apartment in back. Not a man's house. Not a daddy's. A house all my own. With my porch and my pillow, my pretty purple petunias. My books and my stories. My two shoes waiting beside the bed. Nobody to shake a stick at. Nobody's garbage to pick up after." Notwithstanding that, her life on Mango Street, Esperanza realizes once she has moved away, has helped to shape her into the person she has become. And for that, she acknowledges that she will always be a part of Mango Street.