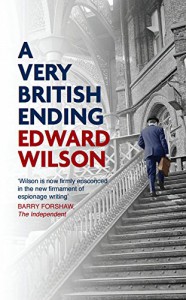 This is one of the BEST espionage novels I've read in quite some time. From start to finish - roughly spanning the years 1947 to 1995 - it captured my interest and held me in its grip.

William Catesby - a polyglot and university graduate with liberal leanings, his mentor at MI 6 (the Secret Intelligence Service - SIS) Henry Bone, Harold Wilson (a real historical figure who would later play a prominent role in British politics during the 1960s and 1970s), James Jesus Angleton (another real historical figure and the CIA's counter-intelligence chief utterly sure of the rightness of 'The Cause' as defined by the U.S. government and possessed of a massive paranoia that would have consequences for him and the CIA itself) and a number of other lesser, though no less intriguing, characters give "A VERY BRITISH ENDING" its thrust, excitement, and provide an insight into significant historical events of the Cold War Era that may make the reader question his/her own understanding of those events.

Catesby epitomizes the classic British civil servant who, having emerged from combat service in the Second World War, served the Crown and Country unselfishly in a peacetime world whose hazards could arise in the most unexpected places. And often did. In the process, he paid a heavy cost as the following passage will attest:

"Catesby was relieved when the door of Number 10 closed firmly behind him. He was glad to be outside - in the cool damp air and away from the funereal tones. In contrast to the gloom inside Downing Street, the street outside was party time, packed and pulsating with people. There were television vans all over the place and what seemed a hundred people snapping pictures or talking into microphones. A reporter lurched up to Catesby and put a microphone in his face. 'Can you tell us the latest, please?'

"Catesby waved the reporter away and turned to the policeman guarding the front door,

"Catesby understood why the meeting had been suspended. Compared to a prime minister, he was too small a prize to pluck and gut. They had got what they wanted - at least, for the moment."

A VERY BRITISH ENDING is a book I could return to again and again. It's that GOOD.