KITTY NORVILLE - BE CAREFUL WHEN YOU MESS WITH THIS SHE-WOLF 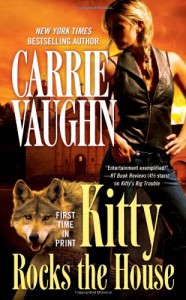 Kitty Norville, one of the world's most recognized female werewolves - not to mention a successful nighttime talk radio show host - returns home to Denver from London. A new werewolf is in town and "threatens to split the pack by challenging [her] authority at every turn." And that is just the beginning of Kitty's troubles.

Roman (aka 'Dux Bellorum'), a 2000-year old vampire bent on gaining full control of all the vampire communities and humanity worldwide as part of his "Long Game" strategy, looms in the shadows. Kitty has had 2 brushes with him previously, and barely survived with a whole skin. This time, a vampire by the name of Father Columban comes into town and stops off in the New Moon, a bar/restaurant owned by Kitty and her husband Ben (a lawyer who is also a werewolf) that also serves as a haven and meeting point for Denver's werewolves for whom Kitty is the alpha female of the pack. Columban wishes to meet with Kitty, who has earned a hard-won respect over the past several years among the vampires of the city. (Usually there is no love lost among lycanthropes and vampires.) Columban is several centuries old, freshly arrived from Europe, who wishes to meet Rick, the Master Vampire of Denver, to undertake a special mission with him.

As the story goes on, Rick mysteriously disappears with Father Columban. This could not have happened at a worse time as a visiting Mistress Vampire from Buenos Aires is due shortly to arrive in Denver to help coordinate with Rick a way for the vampires not under Roman's control to resist his latest efforts to expand his power base. In the meantime, Kitty has to deal with two urgent matters that pose a threat to the Denver vampire community --- as well as to the life she's managed to establish for herself: (1) the challenge posed to her authority by the new werewolf, who thinks he knows better than her what the pack needs in terms of leadership and guidance; and (2) finding Rick.

There's lots of action, and like the other novels in the Kitty Norville Series that I've read, "Kitty Rocks the House" will keep the reader guessing as to whether or not Kitty and her friends survive or lose it all.