WHAT SAY YOU, MAIGRET? 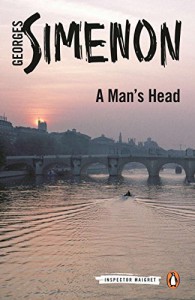 Of all the Inspector Maigret novels I have read thus far (10), "A Man's Head" on the face of it was one of the most baffling to me. The story begins with Maigret visiting La Santé Prison, where a man (Joseph Heurtin) he had apprehended and had apparently proven his guilt in the murders of a rich, elderly American widow and her maid, awaited his execution. Heurtin had always asserted his innocence, though the evidence at the crime scene supported his culpability in the crime. Heurtin had been caught in the summer and at the time of the novel's opening, it is autumn in Paris. Simenon does an excellent job in conveying to the reader the effects of that season on the city and its people. I was left with the feeling of being in a city usually brimming with joie de vivre, but was now subdued, dour. For autumn is but a gateway to a long, chilly, icy winter. A trial for any Parisian or visitor to the city to endure.

Maigret by now has second thoughts about Heurtin. He comes to feel with certainty that Heurtin is not guilty of both murders. But how to prove his innocence? Maigret now puts himself on a course that could lead to him forfeiting his position and reputation within the Police Judiciare. Here is where the novel takes on the characteristics of a maze, yielding an outcome that is both spellbinding and surprising.