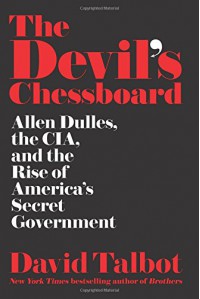 Of all the works of non-fiction I've read thus far this year, "THE DEVIL'S CHESSBOARD: Allen Dulles, the CIA, and the Rise of America's Secret Government" is one of the most profound, sobering, well-researched, and revelatory books I've ever read. At 640 pages, this is a book that demands of the reader a full and earnest commitment. But one should not be deterred by the scope of this book. It has lots of substance to it, is highly readable, and will provide the reader with invaluable insights into how the CIA - and by extension the national security shadowy structure which is undergirded by Wall Street and a coterie of academics, civilian, political & military officials, and conservative-minded monied elites - have exerted for decades a pervasive, coercive power and influence over the U.S. government.

Allen Dulles (1893-1969) stands out in this book as the exemplar of the master power broker, and untiring promoter of "America's Secret Government." Born the second son of a Protestant minister boasting of ancestors who had had distinguished careers in the law, military, and politics (an uncle served as Secretary of State under Woodrow Wilson), Dulles, a Princeton graduate, went on to become a diplomat during the First World War, serving in the U.S. embassy in Bern, Switzerland. After the war, he served (along with his older brother John Foster Dulles) with the American delegation at the 1919 Paris Peace Conference, earned a law degree from George Washington University in 1926, and (with John Foster Dulles) built a lucrative career in New York with Sullivan & Cromwell, one of the most powerful law firms in the country. He also ingratiated himself with many social, economic, and political interests in the U.S. and Europe during the interwar years. Both he and John Foster were staunch Republicans who were vigorously anti-New Deal.

With America's entry into the Second World War, Allen Dulles managed to get an appointment with the country's wartime spy agency, the OSS (Office of Strategic Services) as head of the OSS office in Bern from 1942 to war's end. He proceeded to establish his own fiefdom, concerned himself with re-establishing contacts in former business associates in Occupied France and Germany, and even defied FDR's official policy of unconditional surrender through helping to quietly arrange - with the help of high ranking SS officers Karl Wolff and Eugen Dollmann (both of them war criminals that Dulles protected postwar from prosecution) - a separate peace in Italy on May 2, 1945 (six days before the unconditional surrender of all German forces in Europe). Dulles certainly should have been relieved of his OSS position or reprimanded. But he had his protectors in different areas of the federal government who shared Dulles' political beliefs and uncompromising anti-Communism. So, he was well-protected through most of his public service career, which reached its height during the Eisenhower years, when he was made CIA Director.

Much of the nefarious and shady activities for which the CIA became known were developed and encouraged by Allen Dulles. Examples: the 1953 coup in Iran (the CIA overthrew a popularly elected nationalist government and put Shah Reza Pahlavi back on the throne), the 1954 coup in Guatemala (another "success" with the ouster of the freely elected Jacobo Arbenz leftist progressive government and replacing it with a military junta supportive of U.S. interests), the MKULTRA program (a top secret mind control research project that often used ordinary citizens as unwitting guinea pigs), and Operation Mockingbird - a program through which the CIA poured millions of dollars to influence the output and distribution of news by media organizations throughout the U.S. and the West. At the same time, John Foster Dulles served as Secretary of State, exerting an uncompromising anti-Soviet, iron-fisted grip over U.S. foreign policy til his death from stomach cancer in 1959.

Eisenhower pretty much gave Allen Dulles a free hand in running the CIA. So long as broad policy goals and objectives as developed in Washington were met, that is what mattered most. The U.S. developed during the 1950s an informal empire on the cheap, which was "a product of Ike's desire to avoid another large-scale shooting war as well as the imperial burdens that had bankrupted Great Britain."

With the election of John F. Kennedy as President in 1960 and the coming of the New Frontier a year later, a sea change took hold in Washington. Allen Dulles didn't think much of Kennedy's capacity for leadership, dismissing him as too young and inexperienced to run his Administration. Following the failure of the Bay of Pigs undertaking (which was created during the waning days of the Eisenhower Administration and enlisted support from anti-Castro Cuban exiles and elements of the Mafia, which had lost its gambling monopoly in Cuba once Castro had closed down all the gambling casinos and nationalized mob-owned property; from the book, I learned how badly planned the operation was - that surprised me!; Dulles had anticipated Kennedy using the U.S. military to mount a full-scale invasion of the island and thus ensure the success of the CIA plan) --- for which President Kennedy assumed full responsibility (as a result, his approval ratings shot upward to 83%) --- JFK "took ... steps [by early 1962] to signal that the Dulles era was over and that the CIA would no longer be allowed to run wild; he placed overseas agents under the control of U.S. ambassadors and shifted responsibility for future paramilitary operations like the Bay of Pigs to the Pentagon. It was the Kennedy brothers, not the Dulles brothers, who now ran Washington."

President Kennedy would remove Dulles from his post at the CIA in November 1961. But Allen Dulles did not go quietly into that good night. As always, he "saw himself as above the nation's laws and elected leaders, manipulating and subverting American presidents in the pursuit of his personal interests and those of the wealthy elite he counted as his friends and clients."

President Kennedy would make a lot of enemies among the Wall Street cliques and business interests who came to see him as a national security threat. His handling of the Cuban Missile Crisis and his "Peace Speech" at American University (June 10th, 1963) proved to be the last straw. Within the secret state, a clear consensus emerged: "For the good of the country, [President Kennedy] must be removed. And Dulles was the only man with the stature, connections, and decisive will to make something of this enormity happen. He had already assembled a killing machine to operate overseas. Now he prepared to bring it home to Dallas. All that his establishment colleagues had to do was to look the other way - as they always did when Dulles took executive action."

Should the reader of this critique opt to read "The Devil's Chessboard", I leave it to him/her to reach their own conclusions about Allen Dulles, the CIA, and the Secret Government that is with us still.