BILLY BISHOP, A HERO FOR THE AGES 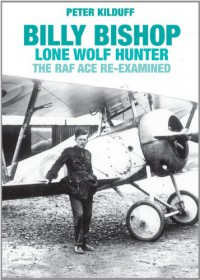 Billy Bishop (1894-1956) emerged from the First World War as Canada's greatest military hero, recipient of the Victoria Cross (Britain's highest award for valour in combat), the Distinguished Service Order (with Bar), the Military Cross (MC), and the Distinguished Flying Cross (DFC). He was one of the top Allied fighter aces, credited with shooting down 72 German aircraft over the Western Front in 1917 and 1918.

Yet, despite Bishop's outstanding combat record, there have been some questions in subsequent decades about the accuracy or veracity of some of his combat claims. Bishop, like Albert Ball (one of Britain's great WWI aces), often flew on "lone wolf" missions over the Front, scoring many of his victories solo. Thus, the author of this book, Peter Kilduff, one of the top WWI aviation historians today, set out to establish --- inasmuch as possible, given that many of the German aviation records from the highest command levels of the Imperial German Army Air Service were destroyed in 1918, in addition to a number of individual squadron records that were destroyed on an Allied bombing raid late in the Second World War --- a comprehensive, even-handed account of Bishop's combat career. He reviews Bishop's "existing combat reports and private correspondence, as well as accounts by friends and foes." The results are evident in a well-written, delightfully readable book chockful of photos and illustrations (many of which were previously unavailable).