ONE OF THE BEST AVIATION BOOKS IN TODAY'S MARKET 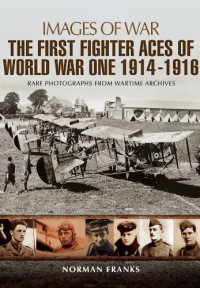 "GREAT WAR FIGHTER ACES 1914-1916" is one of those books that truly lives up to its billing. It provides the reader with a thorough and comprehensive history of the creation and development of the fighter plane as a weapon of war and the birth and celebration by the warring nations (Great Britain excepted) of the fighter ace during the first 2 years of the First World War. What's more: THERE'S A RICH CORNUCOPIA OF PHOTOS (sprinkled throughout the book) featuring various aircraft of the period and the pilots who helped usher in a new type of warfare. Some of these pilots who survived beyond 1916 - Guynemer, Ball, Dallas, Nungesser, Voss, Deullin, and von Richthofen (aka 'The Red Baron') - would later become household names due to their prowess as great aces and leaders.

(Ohhhh, I can't wait to receive the second volume, which will cover the fighter aces of the 1917 & 1918 period.    That is, once it becomes available in the market.)