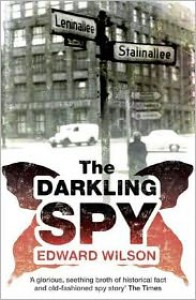 "THE DARKLING SPY" reintroduces the reader to William Catesby, a dedicated top ranking MI-6 agent operating under diplomatic cover in Berlin as Cultural Attaché. The time is August 1956.

Catesby is called back to London by his mentor Henry Bone, "a Whitehall intelligence mandarin", who has learned that a master spy - codenamed "Butterfly" - currently working for the Soviets and East Germans - is poised to defect to the Americans, who are eager to know all his secrets. Secrets including the names of all active British agents behind the Iron Curtain, as well as various intelligence operations and programs that MI-6 has promoted. Indeed, Butterfly's brain is an archive of secrets from both East and West. Lives and reputations are at risk of being destroyed should Butterfly succeed in going over to the CIA. Butterfly has also been a thorn in the flesh for Bone over the previous 20 years. So, Bone hatches a plan in which Catesby, a fluent German speaker, would return to Berlin to track down Butterfly through a painstaking and elaborate process in which he would pretend to defect to the East. Consequently, what ensues is a suspenseful, nail-biting, heart-rending drama that takes Catesby from a Hungary convulsed in counter-revolution during October and November of 1956 into the inner sanctum of the East German intelligence apparatus during the following year, as represented by the mysterious espionage legend Mischa Wolf.

Once again, Edward Wilson has created a winner with "THE DARKLING SPY." It may alter your views about what really went on during the Cold War.