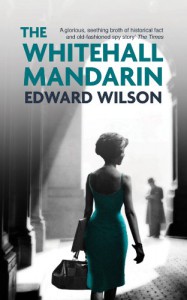 I finished reading "THE WHITEHALL MANDARIN" this afternoon. What can I say? The ending was totally unexpected and yet, strangely appropriate given the deceit and treachery carried out by some of the main characters in the novel. One of whom was from the upper-crust of British society and occupied a very powerful position in the British government of that time. (We are talking about the mid to late 1960s.)

Again the author Edward Wilson mixed in both fiction and historical facts so well that it was sometimes hard for me to distinguish between what was historically true and what was fictional. Events like the Sino-Soviet split of the late 1950s, China's "Great Leap Forward" program - which led to the deaths of 35 million people between 1958 and 1963, the Cuban Missile Crisis (in which brief mention was made by the author of the role played in diffusing that crisis by the British MI-6 agent and polyglot William Catesby, one of the most interesting fictional spies I've ever read about who figures in most of Wilson's spy novels), a major sex/espionage scandal in the UK in the early 1960s that was kept under wraps - a direct parallel to the Profumo Scandal, China getting both the A-bomb and the hydrogen bomb in less time than it took for the U.S. and the Soviet Union to develop them), and the Vietnam War.

"THE WHITEHALL MANDARIN" is a novel that, once read, you'll want to return to again and again because it has so many fascinating layers that will make the reader want to re-examine what the Cold War was all about.