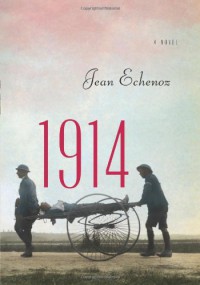 As suggested by its title, "1914" serves as both the key and the cornerstone of the story. A story shaped in every way by war.

"1914" has as its focus 5 men from the Vendée in the Loire Region of France --- Anthime, an accountant by training; his cousin Charles (who felt himself superior to his 4 compatriots); Padioleau, a skilled butcher; Bossi; and Arcenel --- who joined the Army the day after mobilization was declared and were assigned to the same regiment at the Front in the earliest days of the war. The author does a good job of conveying the euphoria felt across France at the time. A euphoria that soon evaporated once the first casualties occurred and stalemate took hold across the Front. Casualties that would grow to a horrifying degree as the war advanced. Charles, who had connections, would secure a transfer to the Aviation Militaire, serving as an observer on a photo-reconnaissance airplane. The others would continue to serve in the trenches, weathering battle after battle. The war would reshape them, too. But I leave it to the reader of this review to find out for him/herself how all 5 men are impacted by their experiences.

SPECIAL NOTE: The Translator's Notes at the back at the book offer some richly informative remarks that will give any reader of "1914" a full flavor of the events and practices of the era within France.   I highly recommend reading them as well.