LIFE ABOARD DESTROYERS IN WARTIME 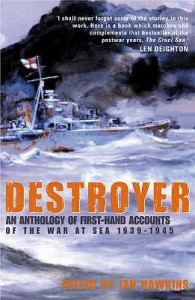 This is one of the best compilations of first-hand wartime accounts that I have ever read.    It is very comprehensive, and for the layman, has a number of appendices that explain in simple terms a lot of arcane facts and lore surrounding Britain's Royal Navy, as well as an invaluable section entitled "Terms and Expressions Used by the Royal Navy."

Here the reader learns from the men of all ranks in the Royal Navy their varied experiences aboard destroyers during the Second World War.   The book is broadly categorized by each year of the war (e.g., "1939", "1940", "1941", "1942", etc.), wherein eyewitness accounts  have been placed corresponding to campaigns and battles that happened in that particular year.    This serves to give the reader a tangible feel for how the stresses and strains of war preyed upon the sailors over time.

For anyone curious to learn about the full effects of industrialized warfare upon sailors at sea, you can't go wrong with this book.  IT IS PRICELESS.