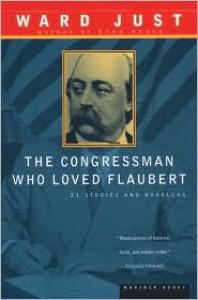 Ward Just is an author that, until today, I had known only by name and reputation for years. But it was in reading this short story collection - "The Congressman Who Loved Flaubert" - that I learned to know and appreciate what a talented writer he really is. Just has a wonderful way, through economy of words, of bringing to life both the interior and exterior lives of people in a variety of venues. He does it so well that the reader comes to understand these people and wants to know more about them.

Each of the short stories takes the reader immediately into the lives and times of the people therein. The themes vary from the political, to the social, and deeply personal. Generally, aside from 2 or 3 short stories that failed to arouse any great interest in me (e.g. "Dietz at War"), I enjoyed the journeys. Just ably demonstrates that the short story doesn't have to be like a mystery novel, free flowing and cleverly constructed like a puzzle that the reader can ponder over, seeking to discover who done it and why. A short story can take moments out of a person's life or out of a singular event or series of events and stir up the reader's emotions and excite his/her interest in that story. In that respect, the short story "About Boston" comes to mind. The word play in it between a transplanted divorce lawyer (a Midwesterner who moved to Boston to establish a law practice with a reputable Boston firm) and his ex-fiancee Beth (a woman who very much knows her own mind) who comes back into his life as his client, is sparkling and laugh out loud funny. I think Just had enough material in that short story to make a novel had he been so inclined.

The following two quotes from the short stories "The Costa Brava, 1959" and "A Woman of Character" also deeply resonated with me.

From "The Costa Brava, 1959" -
"[Bettina] inhabited a country of which she was the only citizen; one citizen, speaking to herself in a personal tongue. Sometimes in her poetry she could hear a multitude of voices, a vivifying rialto in the dead suburban city. On the beach she had felt abandoned; and when she looked across the water and did not see him, she didn't know what to do ; he had been there a moment before, looking at that girl. So she had gone to the water's edge and called, in a joky way; then she was filled with a sudden dread and called again, yelled really, must as he broke the surface, spraying water every which way, his arm straight up --- and looked at so shamefacedly, as he had been caught red-handed. The the bells began to toll and she listened, startled at first; they were so mournful and exact, churchbells from the Middle Ages, tolling an unrecognizable dirge. ... for a long moment, within hearing of the bells, everything stopped, a kind of ecstatic suspension of all sound and motion. She turned away, fighting a desire to cry; she wanted tears, evidence of life."

And from "A Woman of Character" -
"[Sally] had an episodic love affair with the psychiatrist, who appealed to her because he cared nothing about politics. He heard enough about politics in his office; he did not care to hear about them in bed. It was a relationship that suited her because both of them maintained absolutely separate identities: no professional competition, no sexual minuets. It was tricky because when the depressions came upon her she wanted to talk about them with him, and that bothered her because she felt she should be paying for the privilege. It was like sleeping with a lawyer and asking him for tax advice. Sally prided herself on her understanding of mutual interests, her deft estimates of how much should be given and how much taken in any transaction. It was one reason for her success in politics; she learned very early that temporary advantage nearly always led to long-term loss. Except of course with enemies; that was different. With enemies, you used every trick you knew. But with friends the best agreement was an equal agreement, one in which all parties left the table satisfied that they'd gotten what they wanted, or most of what they wanted; in any case, what they had to have. To an outsider it might sound bloodless, but it was important and pertinent to Sally. She'd work too hard establishing her independence to throw it away lightly."

"The Congressman Who Loved Flaubert" gets 4 stars. I couldn't give it the fifth star because of those few short stories in it that made me impatient to be done with them. Notwithstanding that, I enjoyed the experience and recommend Ward Just to any reader in search of interesting stories.