BROTHERS: WHY JFK & RFK CONTINUE TO MEAN SO MUCH TO US 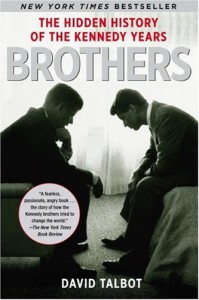 This is a well-documented, heavily researched book that looks into what the Kennedy Years were really like in this country between JFK's election to the Presidency in 1960 and the assassination of his brother, Robert Kennedy, in June 1968.

Though I was born several months after President Kennedy's assassination, I have had an interest in his life and political career since I was a child. And in subsequent years as my knowledge of President Kennedy's life and presidency has grown and deepened, I have grown in admiration and respect for what he (and Robert Kennedy, as the Attorney General and presidential special advisor) was able to achieve and tried to accomplish in the best interests of the U.S..

Talbot goes to great lengths in this book to show the obstacles and challenges --- many of them from within the government itself -- that the Kennedys encountered to their policies and proposals. This became more pronounced in the aftermath of the Cuban Missile Crisis when President Kennedy resolved to embark on "a strategy for peace", which he spoke of so eloquently in his "Peace Speech" at American University on June 10, 1963. Indeed, within weeks of this speech, the basis of a limited Nuclear Test Ban Treaty was worked out between Washington and Moscow on August 5, 1963. And in the following month, the Senate approved the treaty by a resounding 80 to 19 margin.

President Kennedy was seen as a threat by influential elements within the Pentagon, the CIA (which --- following the failure of its Bay of Pigs invasion plan and JFK's dismissal of its Director, Allen Dulles, in November 1961 --- became brazenly disdainful of the President and resistant to his tentative efforts to try and reform the Agency), and elements of the anti-Castro Cuban exile community. War and the promoting of the threats of war were big business at the time. After all, we were living at the height of the Cold War. And the Pentagon, the CIA, and the anti-Castro Cuban exile community profited from that.  The Kennedys could have opted to "go with the flow" by not challenging the prevailing ethos in political circles and the government itself, likely ensuring themselves a longer tenure in the White House. Yet, both came to perceive through the ongoing civil rights struggle against racial segregation in the country and in their own efforts to crack down on the Mafia - as well as addressing a host of other international and domestic crises and challenges - that the country could not go on as it had since 1945. Indeed, it was President Kennedy who said that "those who make peaceful revolution impossible, make violent revolution inevitable." Consequently, President Kennedy was marked for assassination - not by Moscow or Havana, but by a powerful clique in this country made up of business, military and political leaders invested in maintaining what Eisenhower spoke of in his Farewell Address as "the military-industrial complex." So along with the CIA and the Mafia, they conspired and hatched a plan that killed a President riding in an open motorcade in Dallas on November 22, 1963.

"BROTHERS: A Hidden History of the Kennedy Years" takes the reader through that tragic day in Dallas, and illustrates how Robert Kennedy was deeply traumatized by his brother's death. What I found especially interesting as I was reading this section of the book was that, from the moment Robert Kennedy learned of his brother's death (via a phone call from J. Edgar Hoover, whose tone of voice conveyed in no uncertain terms, that he no longer considered himself beholden to the younger Kennedy as Attorney General) that he immediately suspected that JFK had been killed as a result of a conspiracy. That I did not know before reading this book. The reader then becomes part of the painful journey Robert Kennedy undertakes, not only to come to terms with his brother's death, but to continue the fight against the dark elements within the government itself. Kennedy bided his time, resigned his post in the Justice Department, and won election to the U.S. Senate from New York in 1964. Robert ("Bobby") Kennedy's evolution proceeded apace. Indeed "[i]n the last years of his life, Bobby Kennedy became increasingly estranged from Washington's political elite. His growing commitment to a new, multiracial America - which allied him with the crusade of Martin Luther King Jr. - was viewed with alarm by J. Edgar Hoover, who regarded both men as dangerous. And his critique of American foreign policy, ... drew the baleful eye of the White House and CIA."

For anyone who wants a deeper understanding as to why both Kennedy brothers remain an inspirational and relevant force in our politics and in the consciousness of many Americans and admirers across the world, READ THIS BOOK. It made startlingly clear to me their extraordinary fearlessness and unique humaneness as leaders who sought to build and ensure a better, safer world for all people.