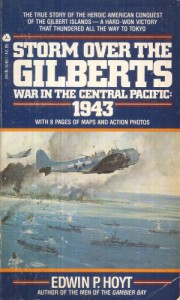 I’ve already read a number of Edwin P. Hoyt’s short histories of various military operations of the Second World War.   This particular book – “STORM OVER THE GILBERTS: War in the Central Pacific, 1943” – offers a concise and comprehensive account of a campaign aimed at further eroding the capacity of Imperial Japan for offensive warfare against the Allies in the Pacific.     The reader becomes a witness to the planning, development, and execution --- from various angles (e.g.the U.S. Army, Navy & Marine senior commanders, the political and military chiefs in Washington, and the various levels of the Japanese naval and air command structures) --- of the invasion of the Gilbert Islands in November 1943.     Hoyt has an unerring skill for providing as complete a picture of the unfolding and playing out of a battle or campaign as possible.     This is a book that will appeal to the general reader, as well as the student of the Pacific War.

One of the findings from the outcome of the Gilberts campaign that I found especially eye-opening was the feeling by many of the Navy and Marine combatants that the campaign was a waste.  (The Battle of Tarawa was one of the bloodiest battles in Marine Corps history, costing the Corps nearly 1,000 dead in 3 days of fighting.)   It was their contention that the Marshall Islands to the northwest (where the great Japanese naval base at Truk was situated) should have been invaded first.    Hoyt, reflecting the views of senior commanders like Nimitz, Spruance, Marshall, and King, states that “[t]he reality was that the Gilberts operation was ‘training,’  and little more than that.  Nonetheless it was essential, for until the Americans had been trained, until the Fifth Fleet had been welded into a fighting force, it might have been suicidal to send it against a stronger bastion.”

A heavy cost was exacted in the Gilberts.   But the sacrifice “paved the way for the whole drive across the Central Pacific” in 1944.   Hoyt has crafted yet another terrific book.