CRASHED & BURNED - NOT A GOOD NOVEL 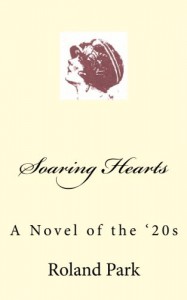 The concept of "Soaring Hearts" is a good one that on the face of it, offers much promise. A young Irish-American woman (Alice Whalen), acting on the recommendation of her sister and sole surviving family member Helen, enters the offices of Flooraflex New England to apply for the position of executive secretary to Charles Gorsuch, veteran World War I combat pilot and scion of an old, monied (now in somewhat reduced circumstances) Maryland family now living in a loveless marriage with children in Boston. The date: August 1926.

The interview for Alice goes smoothly, given her experience at the Federal Reserve Bank of Boston, where she posted currency fluctuations and kept financial records. She accepts Mr. Gorsuch's offer, tenders her resignation at the Fed, and proves to be a perfect fit for Flooraflex, a young company skilled at producing and installing flooring for establishments as varied as universities, hospitals, and large office buildings throughout New England. Good stuff, isn't it?

Well, "Soaring Hearts" for me began to go awry when the author detailed the growing relationship between Alice Whalen and Charles Gorsuch. Much of it read like a tawdry melodrama. Despite the light Roland Park shed on the backgrounds of these 2 individuals as a way of fleshing them out to the reader, they never became real to me. Charles Gorsuch, though basically a decent guy, comes across as a bit of a fool and chump. He doesn't appear to have given much thought about marrying his wife Gertrude, whom he had known for only a short time before joining the Marine Corps, where --- given his prior flight experience --- he first served as a flight instructor in Miami before he was sent to France. Gertrude is a spoiled, vacuous woman from a very wealthy family. Her father, E.V. Thorne, is the archetypal tyrant, cheat, miser, and bully, who has no compunction about misleading and hurting people. He's used to getting his own way. And for Charles Gorsuch, whom he never thought much of, he gives him grief whenever it suits his fancy.

In the meantime, a budding relationship takes shape between Charles and Alice. Outside of work, he takes her on leisurely drives outside of Boston, brings her and a friend to his summer home in New Hampshire (not far from the Canadian border), and buys Alice a new car (with which he teaches her to drive). Their dialogue is so utterly BANAL, sounding like a romance from a ludicrously bad play. Example:

"The pair got out and walked over to the railing by the water. They were alone.

" 'Bobby [Alice's nickname], I can't tell how much your presence has kept me from despair these last few weeks,' Charlie began. 'Things are bad, very bad.'

"He proceeded to give Alice a short summary of E.V. Thorne's attacks and how he had found little or no understanding or comfort at home.

" 'Thank you, Bobby, you give me hope that it won't end in disaster,' he said in closing. 'Can I tell you what I know you already understand? I love you.'

"Alice was ready for this admission, but she gasped in spite of herself. 'Oh Charlie! Oh, Charlie,' she answered, choking back a sob in her throat.

"His arm was around her now at the waist. The breeze of the summer afternoon caressed her face as Alice rallied and made a declaration that in the years to come Charlie would never, ever forget.

... " 'Charlie, our spirits have been soaring together since I first saw you. Forget the troubles of the flesh and embrace the spirit. I love you, too.' "

As I said earlier, the concept of the novel offered considerable promise. It was easily readable, too. But its execution left a lot to be desired. Poorly sketched main characters who never became fully realized persons whom I could relate to, as well as tired, flat dialogue and dull, philosophical musings.

The only saving grace about "Soaring Hearts" is that at 184 pages, it's a short novel.