THEY FLY & FIGHT BY NIGHT 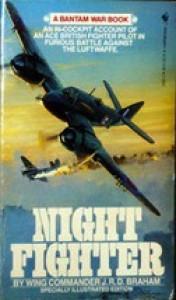 "NIGHT FIGHTER" is J.R.D. "Bob" Braham's story, which lives up to its billing as "fast-paced, hard-hitting and personal."

After leaving school in 1936 and having worked as a clerk in a police station, Braham joined the Royal Air Force (RAF) on a short service commission in late 1937. Despite some struggles during the elementary stages of flight training, he persevered and won his wings in late August 1938. During this time, Braham had his first exposure to night-flying, a skill at which he would become highly proficient during the Second World War.

But before that, Braham was to gain considerable experience flying some of the RAF's standard and recently obsolescent fighters of the 1938-40 period, inclusive of the Hawker Fury, Hawker Demon and Gloster Gladiator biplane fighters, the Hawker Hurricane (one of the modern monoplane fighters then swelling the ranks of RAF Fighter Command, along with the Spitfire), and the twin-engined monoplane - the Bristol Blenheim. Eventually, a short time after the outbreak of war in September 1939, the decision was made to make Braham's squadron into a night-fighter unit. A year would pass before he scored his first kill, flying the Bristol Blenheim.

Braham has a way of bringing home to the reader the stresses, strains, and thrills of combat flying. I gained a deep appreciation for the dynamic, fluid nature of the air war by night as waged between the RAF and the Luftwaffe. Sometimes one side would move a little ahead of its opponent as the technology of radar detection and concealment grew and evolved under wartime pressures --- and changes in tactics and aircraft would tilt the scales, as well.

By 1943, Braham had become one of the RAF's highest-scoring night-fighter aces flying the formidable Bristol Beaufighter and commanding his own squadron. He would go on to help develop "intruder tactics" by which RAF night-fighters could engage in fast, low-level daylight missions against Luftwaffe airbases and German military installations in Occupied Europe, as well as Germany itself. A year later, Braham himself would be shot down by enemy fighters on an intruder mission over Denmark, flying the superlative DeHavilland Mosquito twin-engined fighter. (The way Braham describes this combat in great detail was like seeing a dramatic series of heart-stopping scenes being played out in my imagination.) Braham would return from POW camp in May 1945 and resume serving in the RAF before accepting an opportunity to emigrate with his family to Canada and join the Royal Canadian Air Force (RCAF), where he would serve with distinction for 16 years (1952-68).