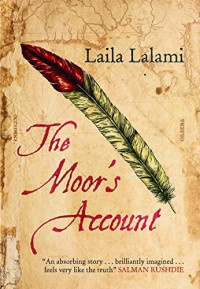 This fantastic, cleverly crafted novel is based on the ill-fated Narváez expedition (1528-1536) in which a large group of Spanish conquistadores and auxiliaries embarked upon a mission of exploration aimed at establishing settlements in what is now Florida and discovering gold. The only account of this undertaking comes from Álvar Núñez Cabeza de Vaca, one of the 4 survivors of the expedition.

With "THE MOOR'S ACCOUNT", Laila Lalami presents the reader with an account of the Narváez expedition from the perspective of the African slave Estevanico (born and reared in Morocco as Mustafa ibn Muhammad ibn Abdussalam al-Zamori). Prior to reading this novel, I had some knowledge - albeit scanty from when I was a schoolboy - of Estevanico and his role in the expedition. This stayed with me for years because I was intrigued to have learned that there were Africans who were part of the Age of Exploration in the so-called New World. So, when this novel was first released, I snapped it up. Little did I realize that in reading "THE MOOR'S ACCOUNT" that I would be transported on a journey rich in adventure and fraught with perils that at times left me breathless and spellbound. The path the expedition traced started in what is now Florida, proceeded along the coastal areas of what is now the Southern U.S., and ended up in January 1536 in New Spain (present day México).

Lalami also shares with the reader aspects of Estevanico's life in Morocco which wonderfully adds to a fuller, richer understanding of this remarkable man who learned to live under the harshest of conditions among the various tribes the expedition encountered, and showed a remarkable facility for languages. I want to thank Laila Lalami for this novel and for autographing my copy of "THE MOOR'S ACCOUNT" when I met her at the 2016 National Book Festival.