A STUDY OF WOMEN'S LEAVENING INFLUENCE IN U.S. POLITICS 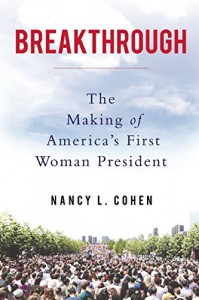 Earlier this year, I attended a book reading at a local bookstore where Nancy L. Cohen gave an expansive and compelling presentation about the discoveries she made and interviews she carried out with a variety of women political leaders, analysts, and activists (of varying ages) in her latest book, "BREAKTHROUGH: The Making of America's First Woman President." She gave me much food for thought as someone who has been deeply frustrated with our current dysfunctional political system (Capitol Hill). So, it was that several weeks later, I bought this book and began to read it with great care.

"Breakthrough" is very readable and provides the reader with "an intimate portrait of the savvy women who have built an alternative to the old boy's club and are rewriting the playbook for how women can rise and thrive in politics." The reader also learns how far women in the U.S. had to go in terms of securing their rights as full-fledged citizens, as well as proving themselves as effective legislators on the state and national levels. Indeed, we as a nation have now advanced to the point that we have a well-qualified, proven and experienced candidate in Hillary Rodham Clinton who may be elected as the next President of the United States very soon.

Thank you, Nancy L. Cohen, for showing me how much closer the U.S. can come to achieving "a more perfect union" through utilizing the energies and talents of women who see public service as a means for building a better society for everyone.