CLASH OF WINGS IN THE STRATOSPHERE 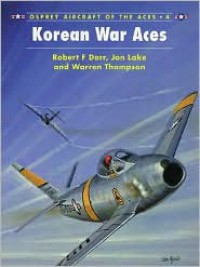 For any reader seeking a basic understanding of the air war in Korea (1950-1953) in terms in fighter vs. fighter combat (as well as air combat in general), "KOREAN WAR ACES" is the ideal introductory book. It describes the nature of the first all-jet war, which began in earnest in November 1950 with the introduction of the Soviet MiG-15 swept-wing fighter, which soon took the measure of the F-51 Mustang, F-80 Shooting Star jet fighter, and the F-84 Thunderjet with which the United States Air Force (USAF) in Korea was largely equipped. Within a month, the F-86A Sabre swept-wing jet fighter came into wide use with the 4th Fighter Interceptor Wing (FIW) and drew first blood on December 17th, 1950.

What is truly remarkable is that while the F-86 was largely outnumbered by the MiG-15 (many of which were flown by Soviet "volunteers" during 1950-51 until these units were withdrawn and replaced by North Korean and Chinese units flying the MiG-15 in combat; generally, the skills level of the North Korean and Chinese pilots was not as high as that of the Russian fighter pilots, many of whom were WWII veterans), the F-86 -in its various variants from the F-86A to the F-86F - generally held its own in aerial combat. Indeed, by war's end, the F-86 pilots enjoyed a 7:1 kill ratio against the MiG-15.

Many of the USAF senior commanders leading the two F-86 equipped fighter interceptor wings in Korea (the 4th FIW and the 51st FIW) and their component squadrons were highly skilled WWII veterans who were highly innovative in developing and using tactics to counter the MiG-15. Unlike their Soviet counterparts, who failed to adopt a system by which their novice pilots could learn directly from their more experienced, battle-tested comrades (whom once they were tour-expired were quickly returned to the USSR), the USAF had a system under which pilots fresh from flight school stateside were quickly embraced by their experienced mates and "shown the ropes." As a result, a very strong, unshakeable esprit de corps was forged, and by war's end, the USAF had produced 39 aces. (The U.S. Navy produced 1 ace - Pierre Bordelon, who scored 5 victories flying the F4U Corsair with VC-3.)

Like other Osprey books of this genre, "KOREAN WAR ACES" is chockful of photos and illustrations. There are also interspersed throughout the book insightful stories of some of the leading aces (and a few non-aces) who flew the F-86. This is a book that gives the reader a tangible sense of what the all-jet war over Korea was really like. And for that reason, I highly recommend "KOREAN WAR ACES."