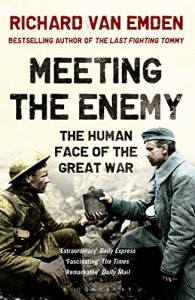 "MEETING THE ENEMY: The Human Face of the Great War" provides the reader with different perspectives of how the war --- on a uniquely human level --- impacted upon civilians and combatants alike in Britain and Germany between 1914 and 1918.

When Germany mobilized for war on August 1, 1914 (having already declared war on Russia; she would declare war on France 2 days later), many British residents and tourists in Germany began to sense that Britain many soon enter the conflict against Germany. And so, many of these residents and tourists began to leave the country by whatever means were near to hand.

"One Englishman looking to leave Berlin as quickly as possible was a fifty-one-year-old language teacher ... Henry Hadley. A former army officer in the West India Regiment, he took his cue to go on the outbreak of hostilities between Russia and Germany. Deciding to catch a train to Paris, he quickly sorted out his affairs in the German capital and then, the next day, returned to his rented apartment and packed his bags, leaving early the following morning." Hadley and his housekeeper, Elizabeth Pratley, travelled by train from Berlin to Cologne without incident. It was when their train approached Gelsenkirchen that matters began to get out of control. Service was slow. Hadley became upset with a waiter and a heated exchange took place in close proximity to a group of dining German Army officers. Hadley made his way back to Mrs. Pratley and asked her to keep watch over the luggage. He said he wouldn't be long in returning. Hadley went into an adjoining corridor on the train. Mrs. Pratley "heard loud noises followed by sounds of a scuffle. She rushed outside to find [Hadley] lying on the floor. 'They have shot me, Mrs. Pratley. I am a done man,' he gasped. A German officer, later identified as Lieutenant Nicolay, had fired his revolver at point-blank range, hitting [Hadley] in the stomach. The Germans then turned their attention on Mrs. Pratley." While Mrs. Pratley was taken away for questioning, Hadley was taken to a hospital in Gelsenkirchen. He died there a few hours later in the early morning of August 5, 1914, shortly after Britain had declared war on Germany. The British government soon learned of Hadley's death and made some inquiries with Berlin, none of which proved satisfactory. (Lieutenant Nicolay was exonerated.) Mrs. Pratley was later released and allowed to return to Britain soon thereafter.

The book goes on to considerable lengths to show how both Britain and Germany dealt with "enemy aliens" in their midst, both during the earliest days of the war and in subsequent years of the conflict. A lot of the stories involving many of the enemy aliens and their families were often tragic and sad, amid the rise and spread of war hysteria. This was especially true in Britain, which had far more naturalized Germans and German and Austrian internees than Germany had British and Empire internees.

"MEETING THE ENEMY" also examines the varied relationships the rival combatants (soldiers and airmen) had with each other throughout the war, both on the front lines (e.g. the Christmas Truce of 1914 and the more limited one that took place the following Christmas - a practice British higher military authorities ruthlessly discouraged) and at POW camps in Germany and Britain. There was an instance in which the Germans, in February 1917, moved a group of British POWs to the Eastern Front, where they were forced daily to work on digging German support trenches and made to sleep in appalling conditions in ragged tents on non-salubrious terrain in the bitter winter weather. This was done for several months as a sort of tit-for-tat because Britain had some German POWs engaged in labor activities at some of the French ports and in areas less than 20 miles from the front. Both countries failed to come to an agreement to resolve this matter of POW employment at the front til later in the year. By that time (November 1917), of the 500 British POWs sent to the Eastern Front to perform hard labor, only 72 returned to prisoner of war camp in Germany. I was both angered and shocked to learn about this incident on the part of the Germans in World War I. (Something of that magnitude I had expected of the Germans in World War II in certain instances. For example, their treatment of Soviet POWs and their murder of 50 captured Allied airmen as a result of the "Great Escape" in March 1944. But not in the earlier conflict in which both sides tended to observe some sort of chivalric code, which was a throwback to earlier norms of warfare in Europe.)

This was the second book related to World War I that I've read from Richard van Emden. And I learned so much from it, because "MEETING THE ENEMY" made me see more keenly than ever how that war impacted on both combatants and societies concurrently.  All in all, this is a very readable, well-written and scrupulously researched book that comes highly recommended.