FROM FLEDGLING TO OLD BIRD 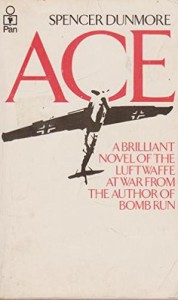 "ACE" in some ways reminded me of the novel "THE BLUE MAX", which I had read (and loved) as a teenager. It begins with a war-weary Luftwaffe fighter ace, Major Ernst Brehme, aloft in his sleek Focke-Wulf 190 fighter in late December 1944, about to tackle an American B-17 bomber, one of the toughest planes in the enemy's arsenal to take on, much less shot down. Stephen Dunmore beautifully describes the process in which Brehme evades a couple of enemy fighters, bravely takes on the enemy bomber, and after a short, sharp fight, shoots the bomber down. Greatly fatigued, Brehme lands at his home base, where, after a short rest, he awakes to find a note to meet with a visiting high-ranking Luftwaffe general at 1900 hours. From the general, Brehme learns that on New Year's Day, the Luftwaffe fighter arm on the Western Front will have as its mission, the destruction of the enemy air forces opposing them by attacking at dawn at tree-top level a select number of Allied airfields in the Low Countries. This leaves Brehme in shock. His war has been a long one and he knows that the Fighter Arm is threadbare, with many of its top flyers either dead or incapacitated. Yet, despite these losses, the Luftwaffe has managed over many months to amass a reserve of 3,000 fighters. Even so, Brehme is doubtful of the success of this mission and while pondering the odds, is drawn back to his earliest days as a fledgling fighter pilot on the Kanalfront in August 1940 during the Battle of Britain.

Brehme does just about everything wrong on his first mission over Britain. Upon landing back at his base in France, his wing leader, Wolff, subjects him to a severe tongue lashing, upbraiding him for failing as a Katschmarek (wingman) to provide cover for Wolff in the midst of a dogfight with British fighters. Brehme then walks dejectedly to his quarters, where he is consoled by Dietrich, one of the old hands in the squadron, who is a bit of a bon vivant with a roving eye for the ladies. Brehme at 20, is one of the youngest pilots in the unit. He has a girlfriend at home. But as Dietrich discovers (after urging Brehme to come with him to a nearby brothel), is highly inexperienced in the ways of love.

Months go by and Brehme manages to survive many more harrowing missions over Southeast England and the English Channel against the enemy. He becomes more proficient with his flying. But still has problems finding his shooting eye. It frustrates him to have been on operations for months and only secured a couple of aerial victories. Then there is a mission in which his Messerschmitt Bf 109E "Emil" has sustained some battle damage and is running low on fuel. He manages to barely get back across the Channel, but lands along a beach with such a hard impact that his fighter turns over on its back, trapping him inside by a canal. Brehme manages to slightly open the cockpit canopy, but can't get out of the plane. He is fearful of fire and possibly being burned alive by some random spark setting off the remaining fuel in his fighter. Luckily for Brehme, a young Frenchman, seeing his plight, is able to get some equipment, which frees himself from the plane. Brehme, who speaks French fluently (thanks to his mother, herself a French speaker, who had spent some time in Lyon in younger days and had urged her son to learn the language), strikes up a friendship with the young man, Georges, who is crazy about aviation. Through this friendship, Brehme meets Georges' mother, a widow 10 years older than him, who regards him warily, with disgust. After all, Brehme is a Boche, a part of the military force occupying France.

Eventually, Brehme and Georges' mother Jeanne, develop a rapport over their mutual love of art which blossoms into something much more passionate and binding between them.  But Brehme and Jeanne are soon forced far apart by events. The fighter wing, of which Brehme is a part, is transferred to Poland in preparation for Operation Barbarossa, the invasion of the Soviet Union, which takes place on June 22, 1941. The author provides the reader with many vivid scenes of the scale of the fighting, both on the ground and in the air over Russia. Brehme manages to maintain a discreet correspondence with Jeanne through a coding system that both had devised while he was in France. Thus, her letters come across as innocuous, an exchange between 2 people with a shared love for art and painting.

The war in Russia comes to dominate most of the novel. Brehme finds his shooting eye there, and within the following year, becomes one of the Luftwaffe's top fighter aces and receives the coveted Knight's Cross from the hands of Hermann Göring himself. In the process, Brehme's star rises considerably, thanks to the efforts of the propaganda machine in Berlin to extoll the virtues of a newfound hero. Brehme is ideal, given his movie star looks, and fits the bill. Yet, as the war goes on, Brehme endures the losses of some of his comrades, as well as the stresses of combat flying. His unit takes part in the later stages of the horrific battle of Stalingrad. Brehme barely survives and is sent back to Germany to recover from his wounds and rest for several months. During this time, he is put on a tour speaking with workers in factories and with students in schools across Germany. Brehme is now one of the nation's idols, adored and lusted after by legions of women, while admired by men, young and old alike. But he isn't comfortable with all the attention and the fame. Though still dating his girlfriend back home, he hopes to find a way to be reunited with Jeanne. Do they reunite? You have to read the novel to find out.

Eventually, Brehme is drawn back to the upcoming mission set for January 1, 1945. The novel's denouement takes place here, with lots of highly descriptive, exciting passages depicting the hazards of low-level combat flying.

I don't know if Stephen Dunmore is a pilot or has ever flown a plane. But he shows in "ACE" that he has a good feel for relating to the reader what air combat during the Second World War was like for a Jagdflieger (fighter pilot). That is what made "ACE" pretty gripping stuff for me.