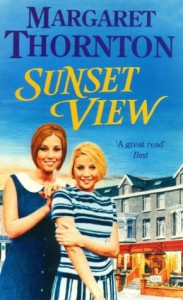 “SUNSET VIEW” takes the reader to Blackpool, England, a popular resort town, in 1965. It is primarily centered on the lives of 2 families, the Hendys and the Jarvises. Doreen Jarvis, a young middle-aged woman, has plans to expand from the modest boarding house she and her husband Norman have operated for the past decade. Cognizant of the ongoing changes both in the hotel industry and in personal tastes, Doreen and Norman sell the boarding house and move their family (their 5 children have been heavily involved in helping run the business) to a hotel they have recently acquired in another part of town. The hotel, which began life as a private residence in the Edwardian Age, is very much in need of refurbishment. Doreen has plans to install a small bar area (contingent upon her being granted a license to serve alcohol), as well as a number of private rooms to cater to clients who like to have a sense of being in “a home away from home” complete with bathroom. At the same time, her children (ranging from adolescence to early adulthood) are growing and maturing, facing their own set of life challenges. The oldest, Veronica, has moved out and shares a flat. She finished school a couple of years earlier to take up a position with Marks & Spencer, a famous clothing store. By dint of hard work and dedication, Veronica is promoted to a minor supervisory position. She is also a woman desperately in search of Mr. Right. Raised a Catholic, Veronica, a tall, lovely and lissome blonde, has fairy tale notions of romance. She wants a man (ideally Catholic) who will love and cherish her, marry, and have a family. The trouble with Veronica is that, while she meets men aplenty, none of them fit the bill. Now with her flatmate soon to marry her fiance, Veronica will be in need of another flatmate, because she can’t afford to live on her own.

At this point, Veronica renews her acquaintance with Sandra Horsfall, whose mother Abby Hendy (who remarried the previous year after almost a decade of widowhood) is one of her mother’s oldest and closest friends. Sandra, who completed school the previous year and is an accomplished pianist, is approached by Veronica in the General Post Office (where she is employed) and asked if she would be interested in becoming her new flatmate. Sandra likes the idea of having a little independence and accepts.

"SUNSET VIEW" then proceeds to show the reader the various tribulations and challenges faced by the Jarvises as they unfold over the next couple of years. Indeed, the bonds of love, affection, and understanding built over a lifetime will shake the Jarvis family to its foundation. And all the while, the reader cannot help but feel his/her heart racing. For Margaret Thornton is a writer with a deft touch, who creates characters who quickly take on real lives.

"SUNSET VIEW" is the third Margaret Thornton novel I've had the pleasure of reading, I recommend it highly to anyone in search of a well-written, compelling novel with which to pass the night or a rainy day.