"McCAMPBELL'S HEROES" - aka "THE FABLED FIFTEEN" 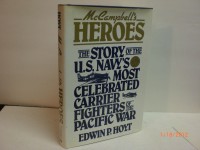 "McCampbell's Heroes: The Story of the U.S. Navy's Most Celebrated Carrier Fighters of the Pacific War" is a concise, comprehensive, and well-written account of a distinguished combat unit as only Edwin P. Hoyt could do. Indeed, this is the fifth book from him that I've had the pleasure of reading.

In 13 chapters, Hoyt shares with the reader the history of Air Group Fifteen (aka "The Fabled Fifteen") from its inception during the summer of 1943 through its extensive training regimen stateside (which was not without loss, given wartime pressures and the desire of pilots in training to perfect and sharply hone their skills), to its deployment in the Pacific in May 1944, where it drew first blood on escort missions against the Japanese occupied Marcus and Wake Islands. The U.S. carrier force by this stage of the Pacific War had grown by leaps and bounds since the critical days of late 1941 and 1942, when the U.S. Navy struggled to contain the full force of the Japanese war machine. Carrier groups made up of both heavy carriers and light or escort carriers, with their protective screen of destroyers, cruisers, battleships, and an array of support ships now freely roamed the Pacific.

Between May and November 1944, when it completed its combat tour, Air Group Fifteen (as part of Carrier Air Group 15) took part in the Battles of the Philippine Sea, the invasions of Saipan, the Mariana Islands and Guam, attacks on Iwo Jima, Okinawa, and Formosa. And to top it off, the "Fabled Fifteen" further distinguished themselves through the invaluable assistance they gave to U.S. ground and air forces during the liberation of the Philippines and the crucial Battle of Leyte Gulf, one of the greatest naval engagements ever fought which witnessed the virtual destruction of Japanese naval power in the Pacific.

For the reader who likes to read stories in which the combat records of soldiers, sailors, and airmen are related in breathtaking detail, there are lots of such stories here in "McCampbell's Heroes." David McCampbell himself survived the war as the U.S. Navy's top ace, with 34 aerial victories to his credit. In one action during the Leyte Gulf battle told in considerable detail in the book, McCampbell and his wingman took on a large number of enemy planes in a series of intense dogfights. McCampbell managed to shoot down 9 Japanese planes (while his wingman got 6) -- a record for a single mission --- and upon returning stateside, was awarded the Medal of Honor by President Roosevelt in the White House in January 1945.

All in all, "McCampbell's Heroes" is a fantastic book which any reader --- from the most casual to the most passionate of aviation enthusiasts --- will savor and cherish.