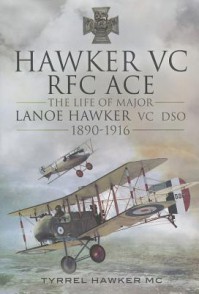 Originally published in 1965, "HAWKER VC - RFC ACE" is a well-balanced biography of an exceptionally talented pilot and squadron leader by his brother Tyrrel Hawker.

Tyrrel's older brother, Lanoe (born in 1890), began his military career when he joined the British Army in 1910. A year later, he earned an officer's commission in the Royal Engineers and proved remarkably adept in any task allotted to him, for Lanoe had a very agile, inventive mind. While in the Army, he became deeply interested in aviation. Both he and Tyrrel were members of the Royal Aero Club and as a result, both were able to visit Hendon aerodrome near London in 1910, where Hawker made the acquaintance of some of the airmen and mechanics there. A few of them were French and Lanoe (who had acquired fluency in the language from the years he had attended school in Switzerland) avidly chatted with them and was taken aloft on a flight. Lanoe would go on to earn, in March 1913, his "ticket" (i.e. certification as a pilot) from a flying school at Hendon. This allowed him to join the Royal Flying Corps (RFC), where Lanoe received more extensive flight training at the Central Flying School (CFS) at Upavon. Flight training at that time was not so much a systematic process as a haphazard series of steps designed to produce what the authorities judged to be a competent pilot. (Only later, under the pressures of wartime demands and necessity, would the Gosport system of flight training come into being which gave the pilot trainee a thorough grounding in both theory of flight, navigation, aerobatics, and flight training from a basic to an advanced level in a variety of aircraft types.)

Lanoe passed out of CFS in October 1914 with a high rating and was soon assigned to No. 6 Squadron, RFC. This was one of the newly formed squadrons which were soon sent to France to assist the British Expeditionary Force (BEF) in its operations against German forces by gathering intelligence (via reconnaissance flights above and behind the lines) and providing artillery support.

Air warfare as such in late 1914 was in its embryonic stages. What I found particularly interesting in reading this book was how, over the following 2 years Lanoe saw action on the Western Front, the tempo of war hastened revolutionary developments in aviation that produced planes capable of carrying out a variety of functions above and beyond the frontlines (e.g. 2-seater planes capable of carrying machine guns, a camera, and bombs as well as single-seater 'scouts' with one or two machine guns synchronized to fire through the propeller arc - a plane which didn't exist when Lanoe first arrived in France).

Lanoe, while with No. 6 Squadron, flew many reconnaissance and artillery spotting missions against the Germans. It was highly stressful, hazardous work, especially as German anti-aircraft guns improved in accuracy and the emergence of the Fokker Eindekker - one of the first true 'scout' or fighter planes which carried a single forward-firing machine gun - served as a potent threat from the late summer of 1915 in challenging the RFC for air supremacy on the Western Front. Lanoe also undertook in a Bristol Scout a number of offensive patrols against enemy aircraft. On one of these patrols in July 1915, he took on single-handed 2 enemy planes, one of which he managed to shoot down in flames in plain sight of thousands of British troops. For this remarkable achievement, Lanoe was awarded the Victoria Cross, Britain's highest award for bravery in combat. (He was also awarded the Distinguished Service Order - DSO - for his overall work with No. 6 Squadron.)

After about a year on active service, Lanoe Hawker was promoted to Major and returned to Britain to take command of a new squadron, No. 24. No. 24 was one of the first true 'scout' or fighter squadrons in the Royal Flying Corps. Its role would be to provide escort to RFC reconnaissance and bombing aircraft to ensure the completion of their missions against the enemy. Furthermore, No. 24 was also free to engage in offensive patrols against enemy aircraft.

The book goes on to provide much information on the service record - through combat reports and personal letters from Lanoe Hawker himself - of No. 24 Squadron under Hawker's leadership. Though a stern commander, he was always attentive to the needs of his pilots and squadron personnel. And, though his flight time was restricted, given his responsibilities as squadron commander, Lanoe flew patrols whenever he could and inspired fierce devotion among his "chicks' as he called the pilots under his command. Indeed, from the time of No. 24 Squadron's arrival in France in February 1916 with the new DeHavilland D.H. 2 fighter, it went on to play a significant role in re-establishing air supremacy for the RFC against the Fokker Eindekker, which it outclassed in terms of flight performance. This supremacy would last well into the summer of 1916 (the Battle of the Somme) and was later lost before year's end by the introduction of superior German fighters (such as the Albatros DI and DII) and specially trained fighter squadrons (Jastas) now arriving at the front in increasing numbers.

Yet despite the challenges these changes in the air war placed before Hawker's squadron, it continued to maintain (notwithstanding some heavy losses it sustained) a high standard as a combat unit. Lanoe was slated for higher command at the time he undertook what proved to be his last patrol on November 23, 1916 in which he engaged in an epic 35 minute fight against the rising star of the German Luftstreitkräfte - Manfred Freiherr von Richthofen, aka 'The Red Baron' - who killed him just as he was within striking distance of reaching safety behind the British lines. He was 25 years old.