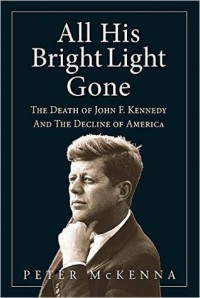 The title of this book comes from the remarks made by Jacqueline Kennedy in a March 1964 newsreel in which she thanked the nation for its expression of sympathy to her in the aftermath of President John F. Kennedy's assassination in November 1963. She spoke of her husband in the following way: "All his bright light gone from the world."

The author goes on to share with the reader how he, who had been a wayward youth in high school during Kennedy's tenure in the White House, had been inspired by JFK to become more engaged in study and public affairs, and to lead a more purposeful life. He then provides a brief biography of JFK, showing what factors in his background helped to make him a statesman of substance and a wise, charismatic, discerning, and dedicated President of the United States. In doing so, the author does not shy away from touching upon President Kennedy's weaknesses (e.g. his affairs). After all, JFK was human and subject like all human beings to err from time to time. But McKenna looks at the totality of President Kennedy and seeks to explain why, more than 50 years after his death, he continues to inspire millions of people across the world.

The author contends that President Kennedy - who had been well-traveled and a voracious reader and student of history, government, and economics all his life - understood, unlike some of the presidents who followed him, that the United States, from its inception, was a democratic republic, "the most enlightened form of government" devised by humanity. Given that understanding of the country, Kennedy "knew it was based on trust in government and the belief that the common good is more important than the enrichment of individuals or special interests." Therefore, President Kennedy made it his focus to govern wisely in the best interests of all Americans while encouraging its citizens to "embrace [their] civic responsibilities" and "to believe that politics is a noble profession." Nowhere perhaps does President Kennedy explain this position better than in the address he made to students at Vanderbilt University on May 18th, 1963.

"I speak to you today, ... not of your rights as Americans, but of your responsibilities. They are many in number and different in nature. They do not rest with equal weight upon the shoulders of all. Equality of opportunity does not mean equality of responsibility. All Americans must be responsible citizens, but some must be more responsible than others by virtue of their public or their private position, their role in the family or community, their prospects for the future, or their legacy from the past. Increased responsibility goes with increased ability. For those to whom much is given, much is required.

"For there will always be those who scoff at intellectuals, who cry out against research, who seek to limit our educational system. Modern cynics and skeptics see no more reason for landing a man on the moon -- which we shall do -- than the cynics and skeptics of half a millennium ago saw for the discovery of this country. They see no harm in paying those to whom they entrust the minds of their children a smaller wage than is paid to those to whom they entrust the care of their plumbing.

"But the educated citizen knows how much more there is to know. He knows that knowledge is power -- more so today than ever before. He knows that only an educated and informed people will be a free people; that the ignorance of one voter in a democracy impairs the security of all; and that if we can, as Jefferson put it, 'enlighten the people generally,' 'tyranny and the oppressions of mind and body will vanish like evil spirits at the dawn of day.' And, therefore, the educated citizen has a special obligation to encourage the pursuit of learning, to promote exploration of the unknown, to preserve the freedom of inquiry, to support the advancement of research, and to assist at every level of government the improvement of education for all Americans -- from grade school to graduate school.

"Secondly, the educated citizen has an obligation to serve the public. ... He may be a civil servant or a senator, a candidate or a campaign worker, a winner or a loser. But he must be a participant and not a spectator. At the Olympic Games, Aristotle wrote, 'It is not the finest and strongest men who are crowned, but they who enter the lists. For out of these the prize-men are selected. ' So, too, in life," he said, 'of the honorable and the good, it is they who act who rightly win the prize.'

"I urge all of you today, especially those who are students, to act -- to enter the lists of public service and rightly win (or lose) the prize. For we can have only one form of aristocracy in this country. As Jefferson wrote long ago in rejecting John Adams's suggestion of an artificial aristocracy of wealth and birth, 'It is,' he wrote, 'the natural aristocracy of character and talent.' 'And the best form of government,' he added, 'was that which selected these men for positions of responsibility.' I would hope that all educated citizens would fulfill this obligation, in politics, in government, here in Nashville, here in this State, in the Peace Corps, in the Foreign Service, in the government service, in the Tennessee Valley, in the world! You will find the pressures greater than the pay. You may endure more public attacks than support. But you will have the unequaled satisfaction of knowing that your character and talent are contributing to the direction and success of this free society.

"Third and finally, the educated citizen has an obligation to uphold the law. This is the obligation of every citizen in a free and peaceful society. But the educated citizen has a special responsibility by the virtue of his greater understanding. For whether he has ever studied history or current events, ethics or civics, the rules of the profession or the tools of the trade, he knows that only a respect for the law makes it possible for free men to dwell together in peace and progress. He knows that law is the adhesive force of the cement of society, creating order out of chaos, and coherence in place of anarchy. He knows that for one man to defy a law or court order he does not like is to invite others to defy those which they do not like -- leading to a breakdown of all justice and all order. He knows, too, that every fellow man is entitled to be regarded with decency and treated with dignity. Any educated citizen who seeks to subvert the law to suppress freedom, or to subject other human beings to acts that are less than human degrades his inheritance, ignores his learning, and betrays his obligations. Certain other societies may respect the rule of force. We respect the rule of law."

And sadly, as the author sets out to show the reader, President Kennedy's death had "a far more profoundly negative impact on the United States than is commonly realized" or appreciated.

This is demonstrated through the administrations of the some of the presidents that followed Kennedy (e.g. LBJ in his support of the Vietnam War and his failure, in certain respects, to be fully honest with the public; Richard Nixon; and Ronald Reagan who promoted the belief among the public of government as enemy of the people, de-emphasized the value and importance of civic virtue and public service in a democratic republic, and extolled the virtues of corporatism in creating a strong economy and society.)

Despite some editing errors I discerned in some of its pages (hence the 4 stars), this is a book I would strongly urge anyone to read who is deeply concerned about the present state of the nation, the levels of corruption in Congress from which its leadership profits at the expense of the public good, and wishes to become more constructively and purposefully engaged as a citizen to help reverse the tide of perversion that has overtaken the republic for the past 50 years. Furthermore, study the life and presidency of John F. Kennedy and take inspiration from a man who possessed rare gifts of brilliance, wit, and compassion.