VOYAGE OF INNOCENCE = A WHIRLWIND JOURNEY THRU THE 1930s 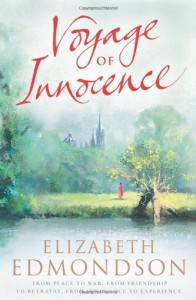 This generational novel is centered on 3 women --- 2 of them cousins from well-to-do English families with long pedigrees and the third, an Irish American Catholic hailing from Chicago, where her father, a physician with interests in party politics, has been elected to the U.S. Senate --- who meet as first-year students at Oxford in 1932.

As the Thirties unfold, the reader is witness to the effects of the contending political movements of the era (communism vs. fascism) on both cousins and its effects, both direct and indirect, upon their families & friends, and their social milieu. As for their American friend who has ingratiated herself among her Oxford contemporaries with her verve, sense and beauty, she "watches and keeps her own counsel, earning the respect and affection of all their circle."

Elizabeth Edmondson has written a novel that grows on the reader the more he/she reads it. Characters - major and minor alike - are well-fleshed out and quickly take on lives of their own that are easy to relate to. That's why over the past couple of days, I raced through this novel. I almost felt as if I were being pulled through the 1930s, experiencing a world perched on a precipice that would soon crumble and fall into the depths of the Second World War. Simply put, "VOYAGE OF INNOCENCE" is one of the best novels I've read so far this year.