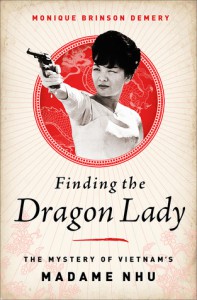 I came to this book in a rather indirect way. Some years ago, I heard a radio interview with the author, Monique Brinson Demery, in which she described her ongoing efforts to meet the mysterious Madame Nhu (1924-2011) and earn her trust. It was a fascinating story. One that stimulated some part of my memory that contained a scrap of knowledge as to whom Madame Nhu was and her role in the leadership of South Vietnam between 1954 and 1963.

The Vietnam War, though the American phase of it largely took place within my lifetime, I knew little about. Nor did I for many years have an interest in trying to understand that war. I was but an infant when LBJ first committed U.S. military forces to South Vietnam in March 1965. And by the time our POWs had been repatriated from North Vietnam and the U.S. had washed its hands of Vietnam, I was in elementary school. Another couple of decades would pass before I began to look into the factors, personalities, and events that led to Vietnam being engulfed in what was a civil war between 1945 (when the French - the former colonial master - returned, intent on reasserting its authority in Indochina) and 1975, when the Communists triumphed and reunified the country. Reading "The Best and the Brightest" by David Halberstam in the mid 1990s was my starting point.

Demery tells a story that gives the reader access into the life of Madame Nhu, her family (who had long figured prominently in Vietnamese history), Demery's own relationship with Madame Nhu (who could be both kind and intransigent when it suited her), and the history of Vietnam from the late 19th century to November 1, 1963 (when both Madame Nhu's husband and her brother-in-law the President of the Republic of Vietnam were murdered in a coup).

For anyone curious to know why Vietnam continues to impact itself upon the American psyche, this is a book well worth reading.