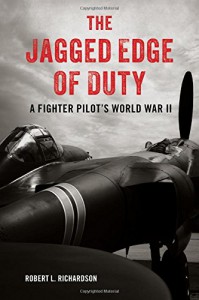 "THE JAGGED EDGE OF DUTY: A Fighter Pilot's World War II" resulted from the extensive efforts made by the author (Robert Richardson) to tell the story of Lt. Allan Knepper of Lewiston, Idaho, along with his friend Herman Kocour, a fellow flight school classmate with whom he later served in the same combat unit overseas. Knepper, a university graduate and schoolteacher, had joined the United States Army Air Force (USAAF) as an Aviation Cadet shortly after the U.S. had entered the Second World War. He was already a licensed pilot through having received his training via the Civilian Pilot Training (CPT) program. Both he and Kocour successfully completed their training as fighter pilots, and after receiving transition training in handling the sleek and powerful twin-engined P-38 Lightning fighter, were sent overseas to North Africa in the Spring of 1943. There, both men were assigned to the 14th Fighter Group, a P-38 unit that had recently been withdrawn from combat owing to heavy losses it had sustained in action. Within a short time, both men would be flying long-range missions against the Axis over the Mediterranean in preparation for the Allied invasion of the island of Sicily, which took place on July 10, 1943.

Richardson provides information about the types of missions flown by the 14th Fighter Group at the time Knepper and Kocour served with it, USAAF tactics and strategy as they were evolving during 1942-43 in North Africa and the Mediterranean Theater of Operations (MTO), some aspects of the war itself, as well as descriptions of the day-to-day stresses experienced by several other pilots in the unit.

Sadly, Knepper's war proved to be short one. His P-38 was downed by ground fire while flying a low-level strafing mission over Sicily against a German Army unit on July 10, 1943. Neither his body nor any wreckage of his plane was ever found.

Richardson also goes on to describe postwar efforts that have been made - and continue to be made - to find Knepper's remains.

While I cannot recommend "The Jagged Edge of Duty" to the general reader, I think anyone with an interest in World War II and combat aviation would enjoy reading it. He/she will learn something of what the average P-38 fighter pilot in the MTO experienced while on active duty during the spring and summer of 1943 as the Allies began their push from North Africa into Europe - with Sicily as the vital stepping-stone.