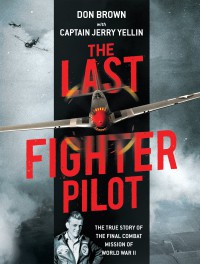 "THE LAST FIGHTER PILOT: The True Story of the Final Combat Mission of World War II" is centered mainly on the combat service of Army Captain Jerry Yellin of the 78th Fighter Squadron (15th Fighter Group, United States Army Air Force [USAAF]) in the Pacific between March and August 15, 1945 (the end of the war). Yellin was part of a unique group of U.S. Army fighter pilots tasked with protecting B-29 bombers on their extended, oceanic missions against Japan in the final months of the war.

Based on Iwo Jima, Yellin and his fellow pilots flew Very Long Range (VLR) P-51D Mustangs on missions over the Japanese home islands that often lasted up to 8 hours. These were very challenging missions, not simply because of the long distances involved - a situation similar to that faced by their counterparts flying P-51 Mustangs with the 8th Air Force in Europe on deep penetration bomber escort missions over Germany. There was also the vagaries of the weather, which cost the lives of some of Yellin's fellow pilots.

The book also serves as a tribute to the sacrifices made by several of Yellin's close friends in the 78th Fighter Squadron who did not survive the war. One of them, in particular, deserves special mention: First Lieutenant Phil Schlamberg of New York City, age 19, who, as Yellin's wingman, was lost on the last combat mission of the war on August 15, 1945.  (A distant relative of First Lieutenant Schlamberg is the actress Scarlett Johansson.)