'A LIFE WELL LIVED' = A NICE BOOK TO READ 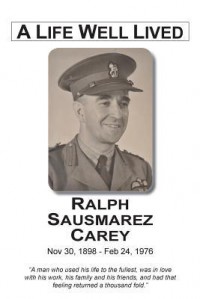 As stated on the back cover, "[t]his book is a wonderful compilation of memories, stories, letters, newspaper articles and" [photos] about the life of Ralph Sausmarez Carey (1898-1976).

Carey, a Canadian from Winnipeg, joined the Royal Flying Corps (RFC) in November 1917 and received pilot training in Canada, the U.S., and Britain. He went on to serve as a fighter pilot in France with No. 73 Squadron, Royal Air Force (RAF), flying Sopwith Camel fighters over the Western Front in the latter stages of the First World War in 1918. Upon returning to Canada in May 1919, he studied at the University of Manitoba, where he earned a B.A. degree. He then went on to earn a law degree and briefly practiced law in the 1920s.

The bulk of Carey's career would be with the Hudson's Bay Company (HBC), a major retail establishment where he worked his way into the upper ranks of management. Aside from his service with the Canadian Army as an administrative officer in Ottawa during the Second World War, he spent 36 years with HBC, retiring in 1965.

What makes this book truly engaging to the reader are: a transcription of Carey's First World War experiences (which he had recorded on tape; his wife preserved it for their children); the personal recollections of Carey's children, former colleagues, relatives, and friends which bring a wider human dimension to the man that was Ralph Sausmarez Carey; and --- Chapter 5, which contains Carey's background and the backgrounds of his parents and siblings.

All in all, "A LIFE WELL LIVED" is a nice book to read.