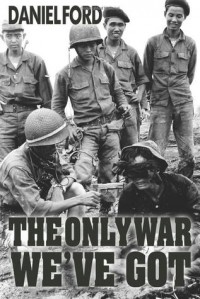 "THE ONLY WAR WE'VE GOT" is taken from the dispatches the author had been contracted to write for a national magazine in the U.S., based on his experiences as a journalist on attachment with the U.S. Army in South Vietnam between May and July 1964. At the time Ford was in-country, "there was a grand total of forty foreign reporters in the country - full-time and part-time, and of all nationalities, not just American."

Ford had written his observations and reflections of all the people he met in South Vietnam --- soldiers, airmen, and civilians alike --- from Saigon to the Mekong Delta, to further north in the Central Highlands near the Laotian border, and eastward to the shores of the Gulf of Tonkin.

Ford returned home before the end of the summer and within a few months, the Vietnam War would take on a greater urgency with the landing of U.S. combat troops on March 8, 1965. The chapters he had written and then sent home were never published after all. Indeed, it would be another 36 years before Ford would re-read those chapters. According to Ford, "[t]hey were a revelation: about the country and the sort of war we were fighting in those early days, and likewise about the young reporter who'd flown to Saigon with an innocence as grassy-green as the American involvement itself."

I was inspired to read this book because of the PBS TV documentary series on the Vietnam War that has been broadcast both last week and this week. I was born the same year Ford went to South Vietnam and have no memories of most of the events associated with that war. I was simply too young to take all that in. But my earliest memories of Vietnam are from 1973, when I watched on TV the arrival in the U.S. of freed American POWs. I grew up with the feeling as the '70s proceeded apace that most Americans simply wanted to put Vietnam as far behind them as possible, and just get on with their lives. Thus, Vietnam became for me a vague abstraction. The Second World War, by contrast, for me was very real because my Dad had fought as a GI in Europe during 1944-45 and several other relatives had also served in the U.S. military during that time. It has only been in the last 20 years (when I read David Halberstam's book 'The Best and the Brightest', a history of the Vietnam War as it passed from being a French war of reconquest in Indochina to an American war) through a slow, gradual process that I began to want to know more about the Vietnam War.

For all its 163 pages, "THE ONLY WAR WE'VE GOT" is a very engaging story replete with many of the B&W photos Ford himself took during his sojourn in South Vietnam. One passage that stands out for me concerns the meeting Ford had with a civilian aide worker who had 20 years' experience of work in underdeveloped countries. It is as follows ~

'I asked USOM Man [the name Ford gave to this civilian aide, because he didn't want to name him, for fear of possibly costing the aide his job] what better solution he had in mind. He said we should cut our military advisory group to its 1962 level - five or six thousand - put most of our money and energy into educating the people, training them to use modern agricultural techniques, and providing them with health care. "The people, " he said mournfully in his almost-German accent. "We need men and women who will work with the people, not more and more military advisors. Pah! What do military men know about the people?" It was a fair question and I decided to find out.'