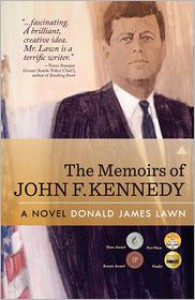 When I first became aware of the novel, "THE MEMOIRS OF JOHN F. KENNEDY", and its premise, I was highly skeptical. Alternative history novels are hardly my cup of tea. Many of the practitioners of the genre - from my perspective - tend to get carried away with their story ideas and concoct novels that take far too many liberties with established historical timelines and personalities, reshaping them in ways that hardly seem plausible or feasible.

Yet, in the case of this novel by Donald James Lawn, I was intrigued. Its premise is based on President Kennedy having survived the assassination attempt against him in Dallas, TX, on November 22, 1963. JFK makes a slow, painful recovery, runs for re-election (against Barry Goldwater) and decisively wins a second term in 1964. Given a two-term Kennedy presidency, the courses of a host of issues that shaped and defined the 1960s - e.g. Vietnam, Civil Rights, and U.S.-Soviet relations - were altered in some rather intriguing ways. I confess that, as President Kennedy is one of my heroes, I wanted so much to believe in what this novel was about. Which is why I read it with a highly critical eye.

Lawn has crafted a novel that realizes a credible scenario that might have come to pass had JFK not been assassinated and juxtaposes it brilliantly with the relationship Kennedy forms with a Washington Post journalist (by the name of Patrick Hennessey) who came to his attention both through Hennessey's book (an exposé of the McCarthy trials, which JFK much admired) and from the time he briefly covered JFK's re-election campaign on Air Force One during the late summer of 1964. Four years later, as JFK's tenure in the White House draws to a close, Hennessey is enlisted by the President to help in writing his memoirs. This is done discreetly because JFK doesn't want to be seen (by some members of his administration) as tipping his hand towards the type of story he wants told of his Presidency, as well as the legacy he wishes to leave the country and the world at large.

In this novel, Lawn takes the reader both through the first crucial weeks after the assassination attempt, and also through the developing personal relationship between both JFK and Hennessey during September and October of 1968. To keep these 2 interconnecting stories both in one novel in this way, isn't easy. But the way JFK, Jackie Kennedy, Bobby Kennedy, LBJ, and several of President Kennedy's closest aides (Dave Powers, Pierre Salinger, and Kenny O'Donnell) are fleshed out, lend considerable credibility to this novel. I really felt that Lawn had captured through several of the JFK - Hennessey conversations (in the White House, on the golf links at Glen Ora, or at Hyannisport), the essence and spirit of JFK the man. Lawn could easily have made a mess of this novel. But I salute him for making a novel that made me want so much to experience the world as it might have been had President Kennedy not been so cruelly taken away from us.