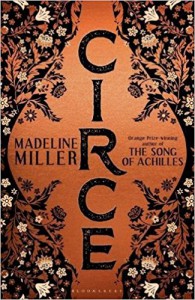 A few minutes ago, I finished reading this book. (It is 1:11 PM EST as I write this.) I feel a deep reluctance to have to take leave of what was truly a wondrous, fantastic, and engaging story. "CIRCE" had become more than a story rooted in myth; it became real in my consciousness.

Before reading this novel, what little I knew about Circe came from the Edith Hamilton book 'Mythology' I had read in high school. That book conveyed to me a vengeful and capricious enchantress (somehow the word 'witch' never entered my consciousness, perhaps because I always imagined Circe to be alluring and beautiful - as well as powerful) who took a dim view to mortals coming to her island. So much so, that many a marooned sailor upon meeting Circe was transformed by her into a snorting pig.

But through reading this fantastic novel, I came to learn so much more about Circe and her origins. Daughter of Helios the Titan god of the Sun and the nymph Perses, she grew up in a family that thought little of her and didn't expect much from her. Yet, unlike her immortal siblings, Circe had some humility and compassion about her that showed that she had a heart. With the passage of time, Circe went on to do something that, as an immortal, she shouldn't have done. It probably would've been to her benefit to lie or simply not speak to anyone of what she had done. But one of the things I found remarkable about Circe was her willingness to speak truth to power (in her case, her father, who had never hid his disdain for her), and to bear the punishment imposed on her by Zeus. That meant eternal exile on the deserted island of Aiaia. And there is where Circe - through the centuries - came truly into her own, honing "her occult craft" and "tam[ing] wild beasts."

Madeline Miller has an amazing skill in crafting prose that breathes life -in all its richness and complexity - into this novel. She relates in compelling detail the varied adventures Circe had, as well as the encounters she had with a number of the gods and mortals (including Odysseus with whom Circe would eventually enter into an intimate relationship) who ventured to her island. There were also some unexpected surprises that I'll leave to the reader of this review to discover for him/herself. (No spoilers here.)

This is a novel that once read you'll want to read again. IT IS AMAZING.