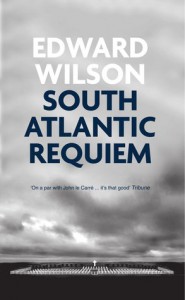 Edward Wilson has crafted another winner with "SOUTH ATLANTIC REQUIEM."

William Catesby, the redoubtable and resourceful veteran MI-6 agent, polyglot, and ever faithful servant of Her Majesty's Government, takes center stage once more. The time is 1979. A new Conservative government has taken power in Britain and is set on shaking things up. And that entails substantial cuts in the defense budget.

There is also a military dictatorship in Argentina eyeing a group of offshore islands -- the Falklands -- that have been under British sovereignty for close to 150 years. The Argentines have long regarded these islands as theirs - las Malvinas. But they have been reluctant to challenge British power for decades. That is, until the change of government in Whitehall. The Prime Minister - Margaret Thatcher - doesn't regard the Falklands as vital to Britain's strategic interests. There are some low level talks between the British and Argentines that hint at putting into place a gradual turnover of the Falklands to Argentina.

Catesby has been made head of operations in South America. Events between 1979 and early 1982 lead to a simmering crisis between Whitehall and Buenos Aires. After Thatcher has ordered the withdrawal of a Royal Navy ship (HMS Endurance) -- which had been patrolling the waters surrounding the Falklands -- the ruling Junta in Argentina busies itself with making plans to seize the Falklands. Catesby has -- through the use in Buenos Aires of a young, savvy, assertive Cambridge graduate (Fiona Stewart - who also displays a facility for languages) he had hired as a part-time agent to keep tabs on the Junta -- kept his ears alert to subtle changes in the political climate. Miss Stewart for a time provides MI-6 with valuable intelligence -- through contacts she has developed among some members of the Argentine government and military (many of them young officers, one of whom - a naval aviator and champion polo player - she falls in love with; the feelings are mutual). But the situation changes and Catesby's intelligence source fades to black --- for reasons that one can discover as the story progresses.

The novel goes on to provide some very revealing insights into how it was that Argentina and Britain went to war over the Falklands in the Spring of 1982. As someone who lived through that time and has some memory of that conflict, I very much enjoyed the way Wilson showed how events unfolded from a variety of personalities and perspectives in the UK, Europe, South America, and Washington.

All in all, "SOUTH ATLANTIC REQUIEM" was a thoroughly satisfying, exciting, and sobering Cold War novel.