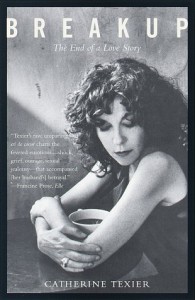 Catherine Texier's story of the breakup of her 18 year relationship with a man who was also her literary partner, lover, best friend, and father of their 2 daughters can best be described as 'an anatomy of an affair'.

From the book's first pages, Texier provides the reader with an open access into the gradual unraveling of what had been for her, a loving and satisfying relationship. Her partner was in emotional withdrawal. Oftentimes, he was surly, abrupt, or would give her the silent treatment. The more I read, the more his selfishness became evident to me. Texier found it so hard to let go of what they had together. And, in his own way, even after admitting --- while both were seeing a psychologist to help sort out their evolving feelings about each other and their dying relationship --- to having an affair and continuing to spend time with 'the other woman', he and Texier continued an intermittent, fiery sexual relationship. As I was reading all this, I wanted to say out loud: "Why don't the two of you make a clean break of it?" Easy for me to say, I know, as a single man with no children. But that's how I felt as I watched their relationship slowly deflate and disintegrate.

I felt sorry for Texier because she was completely blindslided by her partner stepping out on her with this woman. In Texier's words: "The rage of being rejected. It’s one thing to be with a guy and see that he’s losing interest and maybe you are too, and quite another to have built a family and two literary careers and a house and eighteen years of shared companionship, the passion still going full swing in spite of the mounting tensions, and to feel the plug being pulled out overnight without warning.”

There is a denouement between Texier and her ex-partner. As a way of fully coming to grips with the end of the relationship, she has a big blowout party in the apartment she had shared with him and their children. "The party was meant as the kickoff of my new life. It was packed. It went on all night. It was exhilarating. A kind of exorcism. I was reclaiming my sexuality on the turf of our love. The very place where we had loved and hurt each other. I performed it with the ferocious energy of life feasting over a still-warm corpse. I barely had to lift a finger. Everybody had come to celebrate with me. A week before, I had bought a secondhand Isaac Mizrahi poppy-red stretch dress with spaghetti straps. I had carefully chosen the dress. Nothing short of red would have done. The dress worked its magic."

"BREAKUP: The End of a Love Story" has valuable lessons to provide the reader about the dynamics of an intimate relationship that comes to an unhappy end.